Surprising but true: archaeological evidence suggests that pancakes are probably the earliest and most widespread cereal food eaten in prehistoric societies.

A pancake is a flat cake – often thin and round – prepared from a starch-based batter that may also contain eggs, milk and butter.

It’s cooked on a hot surface such like a frying pan or griddle, often with oil or butter.

In the UK, pancakes are often unleavened and resemble a crepe.

But US pancakes use a raising agent – usually baking powder.

They may be served at any time with a variety of toppings or fillings including jam, fruit, syrup, chocolate chips, or meat.

In the USA they are typically considered to be a breakfast food.

In Britain and other Commonwealth countries, they are associated with Shrove Tuesday (“Pancake Day”) when perishable ingredients had to be used up before the fasting period of Lent began.

Last weekend – in conjunction with the Taabinga Rotary Club – I made pancakes at O’Neil Square in Kingaroy to help raise awareness about Rotary’s worldwide campaign to stamp out polio.

Rotary clubs around the world have been working to “make polio history” for more than 30 years.

In 1985, Rotary launched its PolioPlus program with the ambitious goal to end polio worldwide.

These days, only Pakistan, Afghanistan and Nigeria still have endemic polio and in 2014, there were fewer than 360 polio cases in the world.

But the fight isn’t over yet, and Rotary is still raising funds for immunisation programs.

In case you missed my demonstration, here’s one of my favourite pancake recipes. 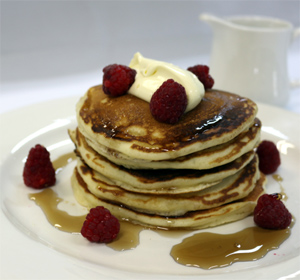