People have been whipping cream in Europe for centuries, and now-days it has found its way into the cuisines of most cultures.

But whipping cream is not quite as straightforward as you may think. There is some important science involved in the process.

To begin with, pure cream has to contain at least 30% fat or it will be unable to hold air bubbles.

Basically, while whipping cream (by hand or machine) the fat droplets connect into a network that collects and holds the air bubbles being incorporated during the whipping process.

This method is referred as ‘aeration’ and results in a thick, fluffy mixture approximately twice the volume of the original cream.

However, if you continue whipping for too long the fat droplets will stick together and begin forming butter.

So don’t whip it too good. This will collapse the mixture, and turn into a yellowish slop of butter and liquid (trust me, I’ve gotten distracted and made butter quite a few times…).

Whipped cream can have flavourings such as sugar and vanilla added, as in ‘Crème Chantilly’, which is delicious.

It can also be folded through a chocolate mousse for enrichment.

And here’s a whipped cream recipe you can have a lot of fun with: 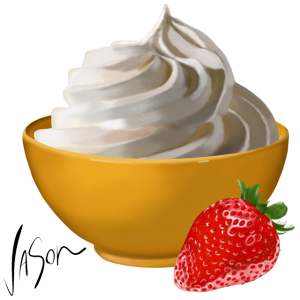 Note: This dish can be garnished with orange segments and a fresh mint sprig. Crumbled meringue can be added for texture.

Danii’s Ready To Hit The Streets

Saints Back In Winner’s Circle