Onions are one of the most humble and least glamorous vegetables on Earth, but most cuisines would be unrecognisable without them.

Onions have a long and colourful past and are probably one of oldest culinary ingredients in human history.

Egyptian hieroglyphics and artwork tell the story of how onions where purchased at great expense to feed the slave workforce and keep them physically healthy and motivated while building the pyramids.

Countless religious writings, scriptures and historical documents from all over the world make references to onions.

There are a myriad of varieties grown for culinary, medicinal and ornamental uses, but only a dozen or so common varieties are found in regular grocery stores.

Brown onions would possibly be the mainstay in most kitchens, because of their savoury, full bodied flavour.

White onions are a little more earthy and pungent, while red onions are quite sweet and are well suited to eating raw in salads.

There are also smaller shallot onions that have a complex balance of sweet and pungent, and are popular in French cuisine.

Pearl onions are small and crisp, and exceptional for pickling.

There are also many fresh green stalk-like species such as Spring Onions and Leeks that are delicate, sweet and subtle in flavour.

Onions are often the quiet achiever of the kitchen, yet it’s all but impossible to imagine a world without them.

French onion soup is a bistro classic, and beautifully warming on a cold winter day. This recipe will serve four people, and takes about an hour to prepare. 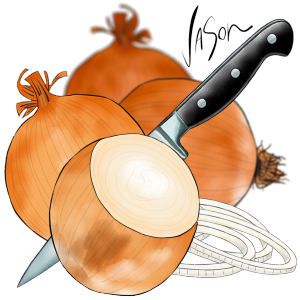 *Alternatively, you can complete the toasts under the grill, then serve them on top.