I live in one of the biggest pork producing regions of Australia, so I’ll admit to being a little biased on the subject of pork.

However, as an apprentice chef in the 1980’s, I didn’t have much experience with pork cookery because it wasn’t all that popular with the typical Aussie.

Which is amazing when you consider that pigs are one of the earliest animals farmed for meat consumption.

Amazingly, pigs have been domesticated in China for approximately 5000 years.

And thankfully, things have changed.

Pork is now one of Australia’s most popular meats, and I have become a huge fan of pork since learning more about it from local farmers, butchers and pork processors.

In the past three decades, major innovations have been developed in pig farming, breeding and production.

Australia’s domestic and booming export market is second-to-none, and our strict quarantine and inspection systems have ensured a clean and disease free pork industry – especially the diseases that have in the past almost decimated the pork industries of other countries.

It would be safe to argue that Australian pork is now amongst the highest quality in the world.

And with developments in grain-feeding and standardised cutting and trimming techniques, domestic pork is also 50 per cent leaner than it was thirty years ago.

In fact – contrary to popular misconceptions – modern pork cuts such as butterfly steaks are so lean and tender that they can be cooked in very much the same way you would cook beef.

You could actually chose to eat it medium-rare, and it would be the most succulent and juicy pork you’d ever eaten.

When buying pork, look for pale pink flesh and firm white fat that is not wet or waxy in appearance.

How To Roast A Pork Leg 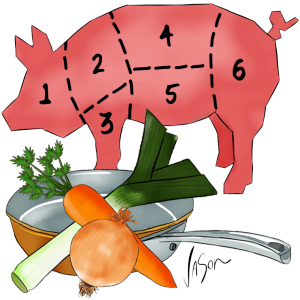 Pork leg is best for roasting. Most pork legs will feed a large family gathering.

To make the leg easier to carve, have your butcher remove any backbone.

The most popular part of eating roast pork is the crackling; and unfortunately there is never enough (you’ll just have to fight over it).

For the best crackling, remove the skin from the leg, score it, and rub it with salt and a little white vinegar.
Then roast the crackling separately, beside the leg.