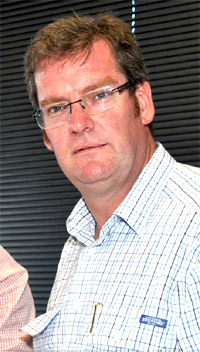 Agriculture Minister John McVeigh has announced fee relief for some primary producers and businesses impacted by the recent floods, but the South Burnett has missed out so far.

The Department of Agriculture, Fisheries and Forestry will vary fee payments for those suffering hardship in the Bundaberg, Fraser Coast, Gympie, Lockyer Valley and North Burnett council areas.

All these areas are currently declared as “Category C” under the Natural Disaster Relief and Recovery Arrangements. The South Burnett currently has an application in for this to occur.

Mr McVeigh said fee relief would also be available to producers in any additional areas that may be declared under “Category C”.

He said the aim was to give businesses a temporary extension on payment of some fees and charges they would normally incur, until they were back in production.

“My department administers a range of fees, particularly in the areas of biosecurity services and fisheries licences,” he said.

The Department of Environment and Heritage Protection has confirmed that environmental fees have also been deferred for those businesses suffering hardship in flood-declared areas.

DAFF will apply this for intensive livestock operations such as cattle feedlots and piggeries.

With regard to the forestry sector, DAFF will assess payment difficulties on a case by case basis in regard to monthly payments of accounts for timber and quarry royalties, as per normal procedures.

Mr McVeigh said other fee deferrals are also being offered; eg. DAFF’s Beef Breeding Services at Rockhampton will hold over January and February invoices, after which, flood affected producers should contact the department if further deferral is required.

The Tick Fever Centre at Wacol, which provides tick fever vaccine for cattle producers, will defer vaccine charges for flood-affected producers who need vaccine to move cattle, as part of the relief measures.