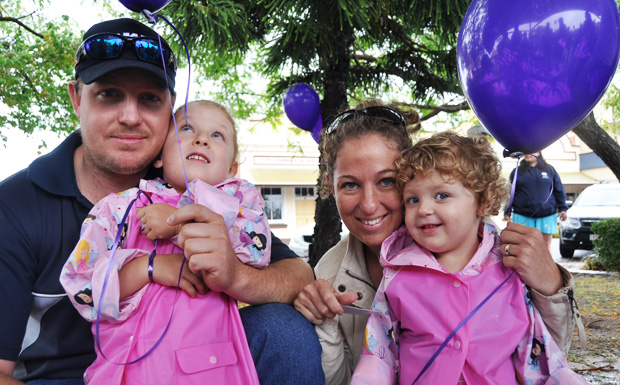 Ben and Melissa Trace with their daughters Callie, 4, and Lucy, 2 ... worried about the future

Wet weather wasn’t enough to stop a community rally against job cuts at Tarong Power Station and Meandu Mine from going ahead in Kingaroy’s O’Neill Square on Saturday morning.

About 100 workers, their families and union delegates gathered … but one group that was obvious by its absence was local politicians.

Electrical Trades Union (ETU) Stanwell delegate Mark Reid said all local politicians and the mayor had been invited but none was available.

“We’ll just soldier on without them,” he said.

Mr Reid said the point of the rally was to make the community aware about the short and long-term impacts of the decision by Stanwell to reduce its workforce.

Organisers had deliberately decided to hold the rally on a Saturday so that families – and the wider community – could take part and learn the union’s side of what had been happening.

“When people start to leave the local community, the lights will come on … people will realise the impact of what has happened,” he said.

Mr Reid said the unions were not trying to be obstructive but were trying to restore some balance into the process.

He said Stanwell had given three reasons for closing two electricity generating units at Tarong Power Station: the price of carbon, the cost of water and the oversupply of electricity.

“The real reason is that they’re making a loss,” he said. “And now they are trying to manipulate the market so that ultimately the market price will rise and they can bring the two units back on and be competitive again.

“But they are also using it as a tool to reduce their workforce.”

Mr Reid said Stanwell had made a clinical decision to halve its workforce.

“We’re in the community. We live here and work here and have our roots here. And then this comes along and turns our world upside down.”

ETU State organiser Dan McGaw said the job losses were not going to just affect the families involved, but would affect the broader community as well.

“For every direct job that goes, 2.5 indirect jobs will be affected,” he said.

Australian Manufacturing Workers Union Stanwell delegate Rob de Vries admitted he had put in an Expression of Interest for a redundancy, but he said he had been at Tarong since 1983 and the offer had come at the right time for him.

However he was worried by the effect the situation would have on his younger workmates.

“I raised four young children here,” he said. “If anything like this had happened 20-odd years ago it would have pulled the cart right out from under us,” he said.

He was also concerned that although 64 jobs were going, there were three vacancies which were going to be filled by people coming from outside the area rather than providing staff already in the South Burnett with an opportunity to upgrade their skills.

“There are really no voluntary redundancies,” he said. “You get the tap on the shoulder, if you say ‘no’ you go into the pool. And where will that be? Outside the Tarong gate. There are no VRs. You’re being booted out; it’s as simple as that.”

He said that whenever politicians talk about creating jobs they boast of the multiplier effect of two or three it will have on the community.

“But you never hear about the multiplier effect when they put jobs off,” he said.

“When are people going to wake up that the loss of jobs affects everybody?” 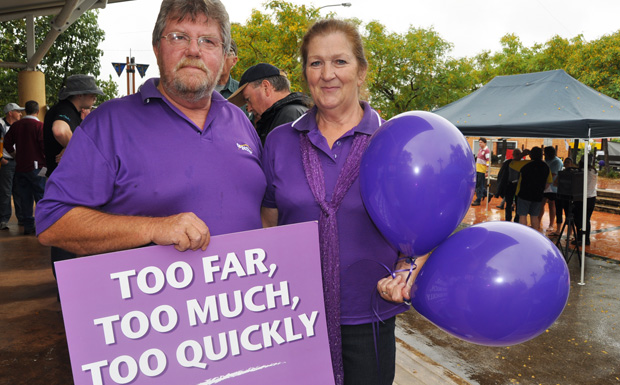 Head organiser Dennis Mullins and Leonie Mullins from the Together Union ... the union has about 30 members at Stanwell 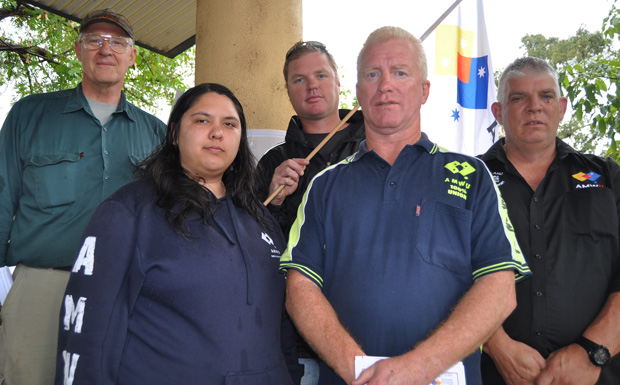 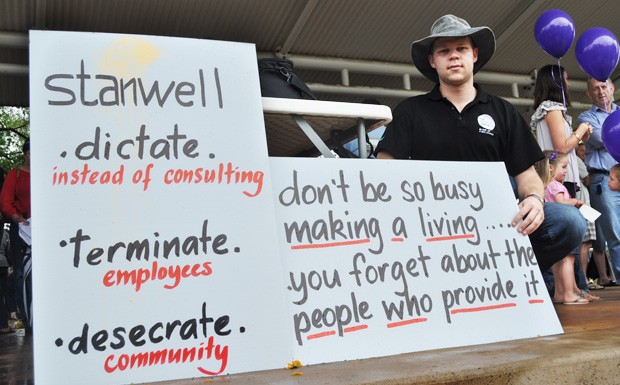 Services Union organiser Lucas Bird ... the union has more than 30 members at Stanwell