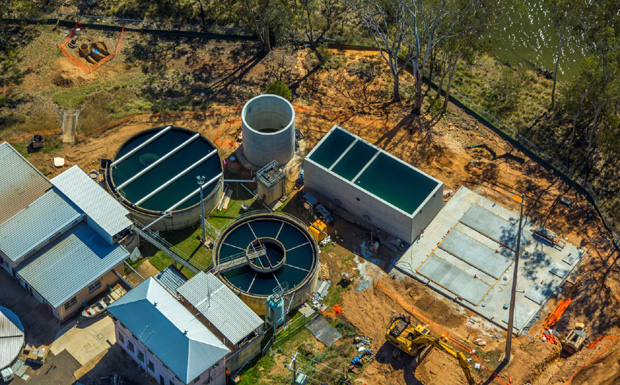 An aerial view of the Gordonbrook Water Treatment Plant which was commissioned in 2015
(Photo: SBRC)

South Burnett Regional Council has assured residents that the town water is safe to drink, despite temporary discolouration.

A Council spokesperson said SunWater was doing maintenance work on the Boondooma Dam to Tarong pipeline, which meant all Kingaroy’s water was coming at present from Gordonbrook Dam.

“Disinfection residuals have not been compromised and whilst the water has some minor discolouration, it is safe.”

Kingaroy residents have been receiving a mix of Boondooma / Gordonbrook water for several years now which has improved Kingaroy’s water quality.

Mayor Keith Campbell told southburnett.com.au he believed that the SunWater maintenance work would be completed on Monday but it would take about three days for the Gordonbrook water to be flushed out of the system.

Council has advised Kingaroy residents that once the the water has flushed through the system, the following steps may assist:

South Burnett Regional Council admitted on Thursday afternoon that water discolouration may also be occurring in Kingaroy due to the water mains replacement program.

It issued a statement that water mains maintenance, repairs or flushing may result in sediment being disturbed in the water pipes, resulting in the tap water appearing discoloured.

In some instances, organic material found in the main water source may also cause discolouration.