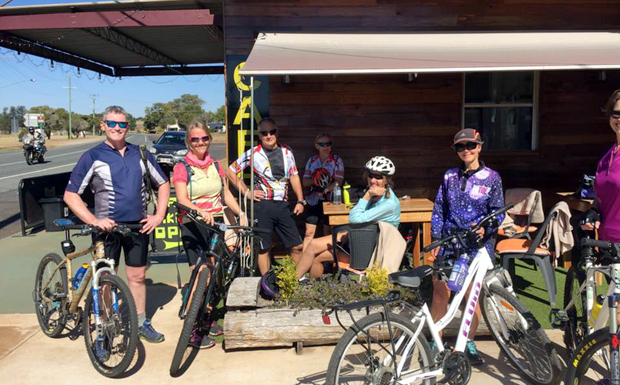 A group of South Burnett Rail Trail users taking a break at a Wooroolin cafe in July … the accuracy of Rail Trail traffic figures being reported to Council is now being questioned (Photo: SBRTUA)

Almost two years after it was officially opened, the South Burnett Rail Trail still does not appear to have reliable traffic counters in operation.

Cr Duff said Wondai’s traffic count for August was 531 – an average of 17.1 Rail Trail users per day – and the peak day was Saturday, August 3, when 48 people passed the counter.

By contrast, only 162 people passed the Crawford counter – a daily average of 4.1 – and the busiest day was Monday, August 12, when nine people were recorded.

Cr Ros Heit questioned the accuracy of the data.

“I know there were 34 bikes using the Rail Trail on one day in August when an event was being held on the Rail Trail, and they would have all passed the Crawford counter,” Cr Heit said.

“I also know I see people on the Rail Trail every day.

“So I wonder if someone can have a look at that counter because I really don’t think it’s working properly.”

In June last year the SBRC reported that Wondai’s counter had recorded 6380 people using the Trail between mid-February and May, while Crawford’s counter – which didn’t come into commission until mid-March due to technical issues – recorded 3539.

However, in June this year the SBRC replaced the original pair of counters with new ones due to ongoing malfunctions the manufacturer was unable to resolve.