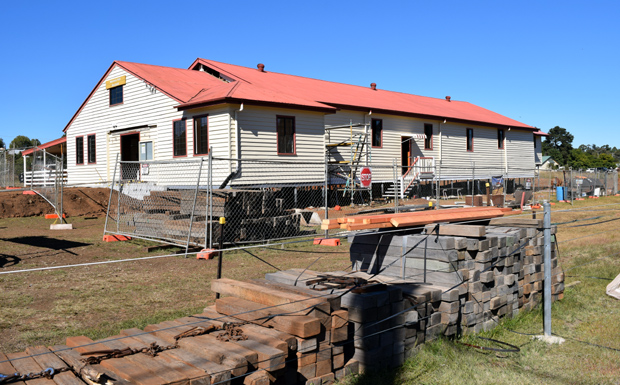 The official re-opening of the Blackbutt Memorial Hall will be held on Saturday, October 7.

The hall was moved to its new position near the Blackbutt Showground earlier this year to make way for the construction of a supermarket in Coulson Street in a deal done between the South Burnett Regional Council and a developer.

The hall was moved in sections, rejoined on site, repaired and repainted.

Council has undertaken to do landscaping around the building and construct a sealed car park.

Blackbutt residents enjoyed a preview of the inside of the hall at the recent Avocado Festival when cooking demonstrations and other activities were held there.

But on Saturday, October 7, the official re-opening ceremony will be held, starting with an official ribbon-cutting ceremony by South Burnett Mayor Keith Campbell.

The Taromeo Country Music Club will also be providing entertainment.

In addition, there will be an historical display and slideshow by the Blackbutt District Tourism and Heritage Association, raffles and door prizes, and a cash bar.

Tickets should be bought in advance at the Blackbutt Visitor Information Centre in Hart Street.

Adults are $10, concessions $8 and children accompanied by an adult are free.