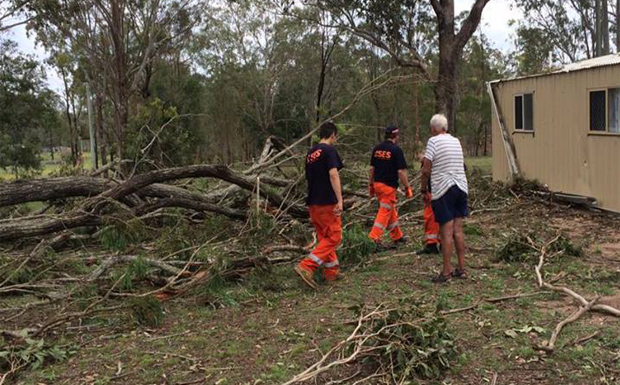 SES crews inspect a fallen tree that clipped the side of a house in the South Nanango area
(Photo: Nanango SES)

Storms that have whipped through the South Burnett over the past few days have caused major blackouts, pelted crops with rain and hail, and kept SES volunteers, council workers and Ergon Energy repair crews run off their feet.

Social media has been filled with reports of lost pets, found pets and freezers full of food going off; as well as photos of  pea-sized and marble-sized hail.

The storms have shared their impact around (most of) the South Burnett.

Sadly, there are still parts of the South Burnett which received no rain at all at the weekend. 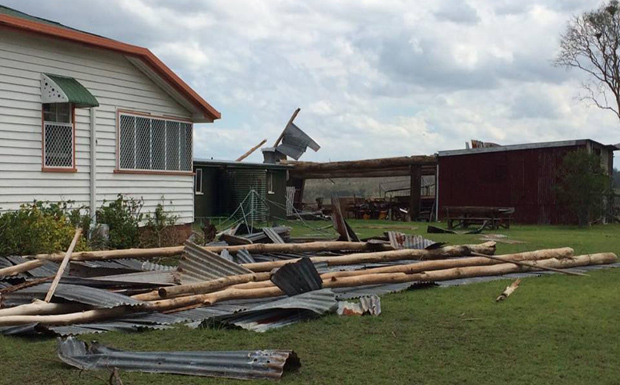 A shed in the Nanango area was dismantled by the strong winds that accompanied Saturday's storm (Photo: Nanango SES)

Some parts of the Nanango area were without power for more than 40 hours from Saturday night to mid-morning on Monday.

An Ergon Energy spokesman said the damage to local electricity infrastructure was mainly caused by the strong winds, although some damage had been caused by lightning strikes.

The Saturday storm damaged the main high-voltage line from Kingaroy to Nanango and Yarraman which caused a blackout affecting about 5000 homes and businesses.

Supply was restored to about half these premises when the Yarraman substation was energised from a different source on Saturday night.

However, more than 20 fallen power lines in the Nanango region had to be isolated individually before the feeder lines from the Nanango substation could be re-energised.

Specialist crews also had to be called in to repair some substation damage.

About 700 Ergon customers, mainly in the southern and eastern parts of Nanango, got power back about 9:25am on Monday and more were back online about midday.

By 10:00pm on Monday, all but 15 customers who lost power on Saturday evening – mainly in the Parsons Road and McNamara Road areas – had their supply reconnected.

The Ergon spokesman said there was also a small number of customers who would need work done by an electrical contractor before their supply could be reconnected.

The extended blackout prompted the South Burnett Regional Council to start preparing an emergency evacuation centre at the Nanango Cultural Centre on Monday, but power was restored before this became necessary.

The scenario was repeated on Monday afternoon, this time with about 500 Ergon customers in the Kingaroy, Booie and Gordonbrook areas losing power after the latest storm passed through the area.

If any property is still without power, residents have been asked to log a request with Ergon on 13-10-46. 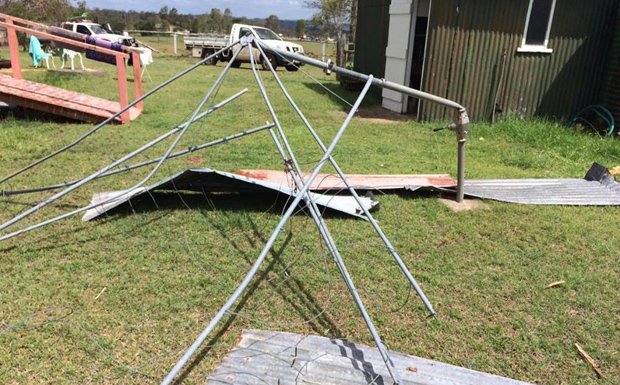 Imagine the strength of a wind gust that could snap over a backyard clothes hoist
(Photo: Nanango SES) 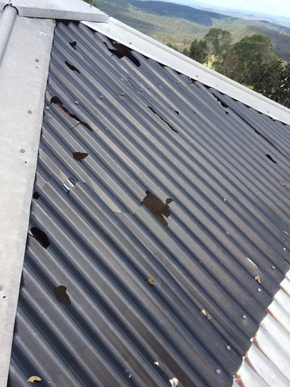 Hail stones smashed holes in this roof at Nanango; there were reports of golf-ball sized hail in Nanango and Blackbutt
(Photo: Nanango SES)

SES Area Controller Arthur Dawson said a dozen houses in the Nanango area were damaged during the Saturday storms by falling trees.

SES teams from Nanango were joined by colleagues from Kingaroy, Blackbutt, Murgon and Proston as well as rural firefighters to remove trees from across buildings, roads and driveways in the South Nanango and East Nanango areas.

SES crews were back out in action on Monday afternoon, this time to the Kingaroy area, assisting with tarping roofs damaged by hail.

Mr Dawson said any residents who still required assistance with cleaning up large trees which were restricting access to their property, or trees that had fallen on buildings within their property, should contact the SES on 13-25-00. 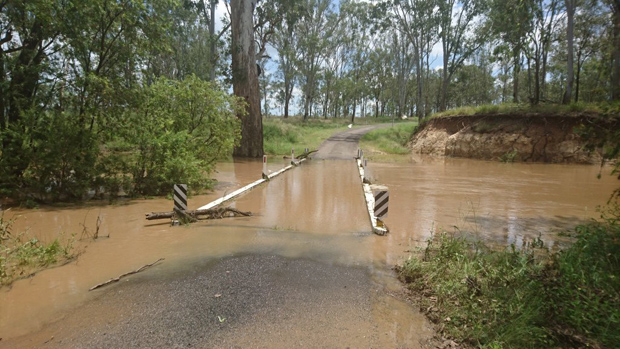 Webbers Bridge across Barambah Creek at Wooroonden was under water on Monday morning after the weekend's storms (Photo: Claire Kapernick)

A 67-year-old couple became stuck after their vehicle stalled in a flash flood on the Wondai-Proston Road on Friday night.

The incident occurred near the intersection with Byee Road about 11:30pm.

Senior Sergeant Lance Guteridge, from Murgon Police, said the couple were not injured and were taken home by police.

“But it’s a timely reminder, if it’s flooded, forget it,” he said.

The swimming pool at the Yallakool Caravan Park at Bjelke-Petersen Dam has been closed in the wake of the weekend’s storms.

A South Burnett Regional Council spokesperson said it would be closed until Ergon Energy crews have repaired damage and the chemical levels of the pool water have been brought back up to a safe standard.

The caravan park and dam are open as usual.

Wondai-Proston JRLFC president Aaron Clancy said the water went through the canteen, storerooms and dressing sheds, leaving behind a pile of mud.

Other buildings at the Wondai Sportsground were also affected, and water also inundated the nearby golf course.

“It’s lucky we have been refurbishing the canteen so we had taken out all the refrigerators,” Aaron said.

He said everyone had told him the water had not come into the canteen even during the 2011 floods.

South Burnett Regional Council advised residents to throw out food which may have been spoiled during power outages.

Council recommended the following foods should be disposed of: