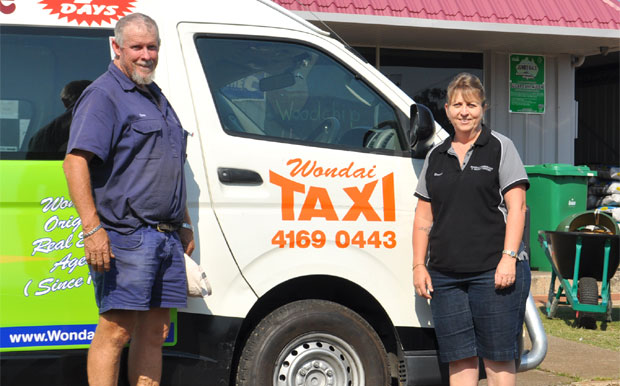 After an absence of three years, Wondai will have a taxi again when a new community-based service begins operating on Monday.

The taxi service has been brought back to Wondai by Chris and Donna Kennedy, who are probably better known as the owners of the Wondai Hardware & Trade Centre in Scott Street.

Chris and Donna decided to add a taxi to their business earlier this year when the Department of Transport put the town’s taxi licence out to tender and no one made any move to take it up.

Chris said that through his involvement with the Wondai Chamber of Commerce, he knew many Wondai residents needed a taxi service in town.

The previous service closed in 2010, leaving people who didn’t have a car with few options except hiring a taxi from Murgon or Kingaroy, or trying to get transport help through social service agencies.

When no one seemed willing to bid for the town’s licence, Chris and Donna decided they’d do it themselves.

“We just got up one morning, looked at each other and said “let’s do it”,” Donna told southburnett.com.au.

“We didn’t want to go into the taxi business but we knew the town really needed it and we thought we could work it around all our other commitments somehow.”

The Kennedys persuaded the Department of Transport to extend the tender period slightly so they could get all the necessary paperwork together.

But Chris admits it was still a close-run thing … their tender landed in the department’s box just 15 minutes before the final deadline.

If they had missed the deadline, the licence would not have been offered again until 2015.

Since winning the tender, the couple has been kept busy organising drivers and securing a suitable vehicle.

They have arranged a new phone number for the service  – (07) 4169-0443 – and applied to the South Burnett Regional Council to move the old taxi rank closer to their store so they can operate more efficiently.

Their new taxi is a 10-seater mini bus with Australian-standard disability access for wheelchairs.

So how much has the new taxi service cost to set up?

“We haven’t stopped to add up the figures,” Donna said, “but it’s been a lot.”

The Kennedys don’t want to make a profit out of the town’s taxi, though.

Instead, once they’ve recovered their outlays, they intend to run it as the South Burnett’s first community-based taxi service, donating any profits directly back into the town.

“The taxi service has to cover all its costs like any other business,” Donna said. “That includes things like annual registration fees, repairs, depreciation and drivers’ wages.

“But we never set out to be in the taxi business and our only reason for doing this is to help our community.

“So we’d like everyone who uses this service to know that if it does turn a profit, that profit is going straight back to local groups like the Wondai Kindergarten or the swimming club or any of our town’s other groups that need a hand.”

The new taxi rank is located at the corner of Scott Street and McLucas Lane, just next to the Wondai Hardware & Trade Centre.