Beyond The Nest Kicks Goals

South Burnett Eagles rugby league players will be vying for Man of the Match points in all their games this season.

There are Eagles teams playing in the Toowoomba Under 15s, Under 16s and Under 18s competition – with Round 1 of the Under 15s and Under 16s starting this week.

SBRL rep co-ordinator Scott Prendergast said sponsors had been been brought on board to support each of the weekly awards.

The Eagles teams are products of the South Burnett’s popular rugby league development program, “Beyond The Nest’, which has been running for the past four years.

“Beyond The Nest”, the overall South Burnett Rugby League competition and the A Grade Player of the Year competition are all being sponsored this year by Ken Mills Isuzu Ute.

New training equipment, including balls and tackle bags, were handed over to the Beyond The Nest program on Wednesday.

Scott said the first graduate from Beyond The Nest had run on for an A Grade side at the weekend.

Josh Peterson, from Murgon, had a strong game for Newtown in the Toowoomba Rugby League competition.

Two South Burnett Rugby League A Grade games were played at Cherbourg on Saturday, plus a full round of junior games.

In the first A Grade game, both the Cherbourg Hornets and the Wondai Wolves were looking to notch up their first win of the season.

After a close tussle, the home team defeated Wondai 24-18.

In the second game, Kingaroy Red Ants drew 40-all with the Murgon Mustangs.

The second Under 14s game was played at Jandowae, where Chinchilla Bulldogs defeated Nanango Stags 24-10.

There are no A Grade or Under 18s games this weekend due to 47th Battalion duties in Bundaberg.

South Burnett players will be joining with players from across the rest of the Wide Bay region to compete as the Wide Bay Rangers (see team list, below).

There are several familiar South Burnett names in the 2021 Western Mustangs women’s squad announced this week, including Traevonnah Fisher and Tenesha Trunks: 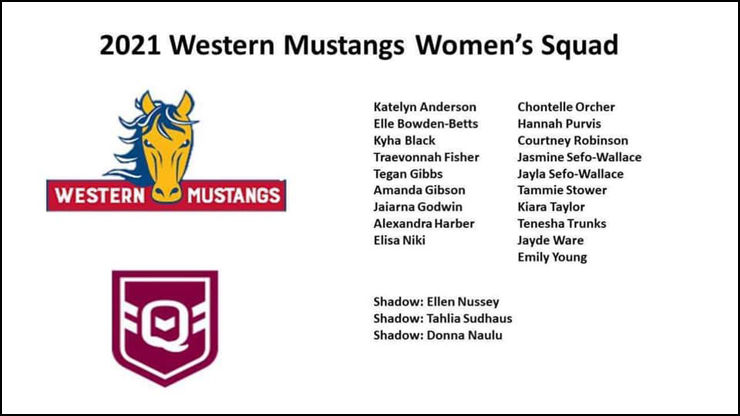 Seagulls are undefeated after five rounds.

Try-scorer Selwyn was interviewed after the Seagulls defeated Redcliffe Dolphins 34-28 on April 18.

Wondai Wolves will be celebrating the 51st birthday of their clubhouse at Wondai Sportsground on Saturday, May 22.

Ex-players will be returning for a special clubhouse celebration from 12:30pm to 3:00pm.

Past and present members, players and guests are invited to come along and share memories and a few drinks.

Entry is $5 which includes light refreshments and entertainment.

A licensed bar will be operating and Wolves memorabilia will be on display.

The 2021 Zone 5 U35kg and U43kg Carnival will be held in Roma and Wandoan during the first week of the June/July school holidays.

A skills and drills session will be held on Monday (May 3) from 3:00pm at T.J. O’Neill Oval in Kingaroy for all eligible players in the Under 9/10 and Under 11/12 age groups.

NB. South Burnett girls will also be playing in Under 13s, Under 15s and Under 17s with Dalby teams this weekend in Round 1 of the TJRL women’s competition at Dalby.

Councils Crack Down On Dumpers

Proston Team Off To The Ekka!

Countdown To The Finals

Diggity Is No Duffer