Auction Goes Into Bat For Relay

The COVID-19 pandemic has definitely made things tough for South Burnett Relay For Life’s fundraising efforts this year.

The Relay itself was cancelled, as well as many individual fundraising efforts.

The event that always attracts the biggest donations, “Dinner With The Captains”, also could not go ahead.

“The Dinner Committee met several times earlier in the year to consider if there was an alternative way – something else we could do – to raise much-needed funds to help in the fight against cancer,” South Burnett Relay For Life patron Carl Rackemann said.

“We decided on a live auction on radio CROW-FM.

“We have been working hard to put together a quality list of auction items, and seek the support of some of our past dinner sponsors.

“I’m very pleased to announce that Telstra Store Kingaroy immediately came on board as our major sponsor.”

The on-air “Auction With The Captains”, sponsored by the Telstra Store Kingaroy, will run on CROW-FM from 6:00am until 10:00am on Friday, November 27.

“Telstra Store Kingaroy has been the major sponsor of Dinner With The Captains for a number of years now, and we sincerely appreciate their support of this fundraising event,” Carl said.

“As well as some amazing auction items, we will have former national sporting captains joining us through the morning.

“Bidding will be ongoing over the four hours on each item.

“Included in the auction list, unsurprisingly, there are a few cricket items but also a signed Brisbane Roar shirt donated by Telstra Store Kingaroy and a framed Powderfinger poster signed by the band members for all the music fans.

“OzValue AG is donating a four wheel BEGIN hay rake for the farmers to bid on.”

Carl said the full auction list would be confirmed in coming days.

“We would like to say a huge thank you to radio CROW-FM for agreeing to deliver this event,” he said.

“CROW-FM have been great supporters of our dinners since the first one in 2010, and of Relay For Life.” 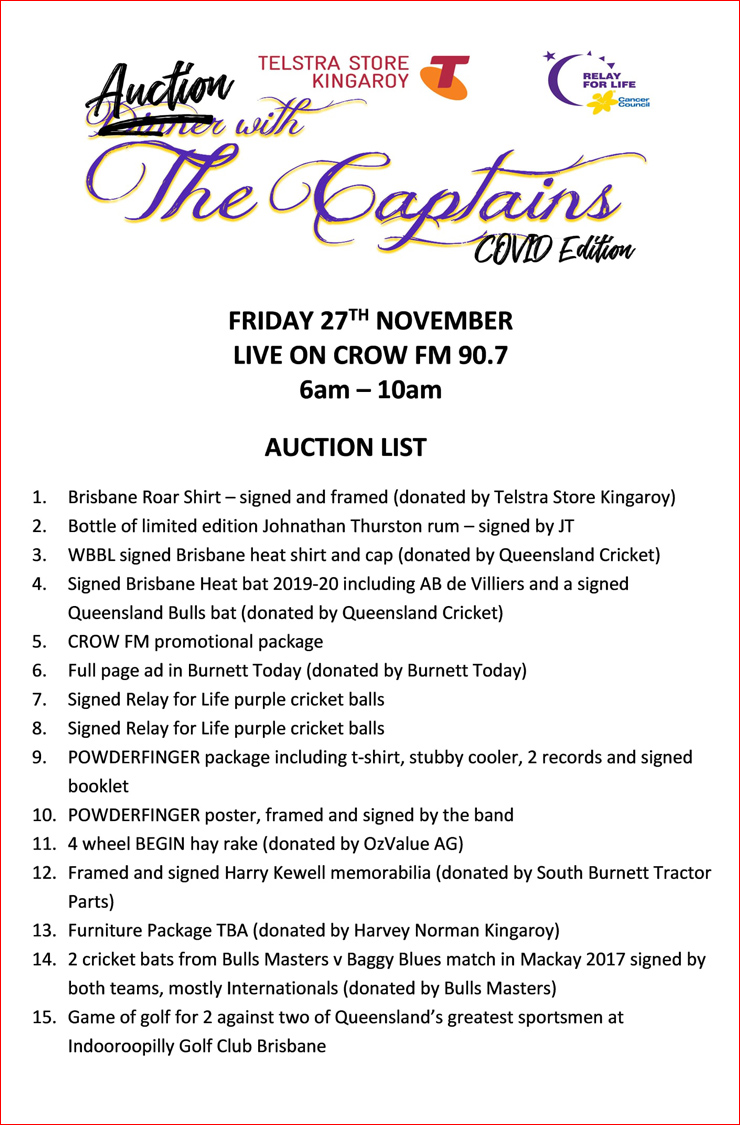 Have You Visited Brisbane?