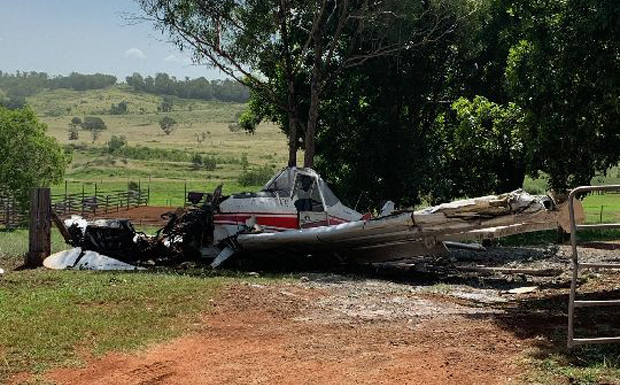 The badly damaged plane landed in a property near Birt Road (Photo: Supplied)

A pilot has escaped serious injuries after his cropduster crashed on the north side of Kingaroy on Sunday morning.

The Sunshine Coast-based RACQ LifeFlight Rescue helicopter was called to the incident at 6:30am to a private property in Birt Road.

It’s believed the pilot had been cropdusting a local property when the aircraft lost power.

The pilot, aged in his 40s, attempted to make an emergency landing.

He managed to get out of the wrecked plane, suffering only minor injuries.

All emergency services attended the scene.

QFES sent three crews who were standby in case a fuel leak sparked a fire.

A spokesperson for the Australian Transport Safety Bureau said investigators would not be attending the crash site.

Raw video from the crash scene, courtesy of RACQ LifeFlight