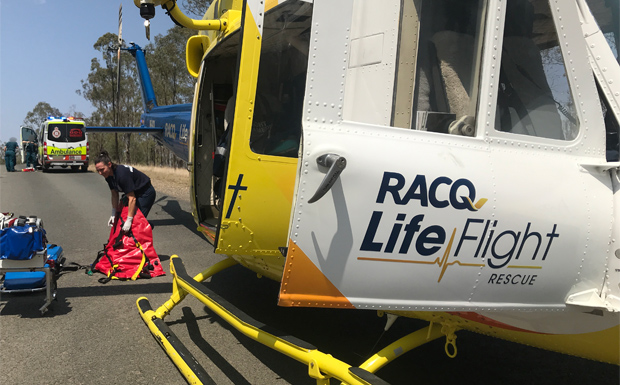 The medevac helicopter near the crash scene on Friday morning (Photo: RACQ LifeFlight)

An elderly man has been airlifted to hospital following a single-vehicle crash on  Friday morning at Elgin Vale.

Emergency services were called to the incident on Manumbar Road just before 8:30am.

The Mitsubishi Colt was travelling south when it left the gravel road and crashed through a fence.

An RACQ LifeFlight helicopter landed near the crash site.

QAS paramedics treated the man – believed to be in his 70s – at the scene before he was flown to the Sunshine Coast University Hospital in a stable condition with suspected head and chest injuries.

A man aged in his 20s was transported to Kingaroy Hospital in a stable condition on Thursday night after a motorcycle crash on the D’Aguilar Highway.

The crash is believed to have occurred after the rider attempted to avoid a kangaroo.