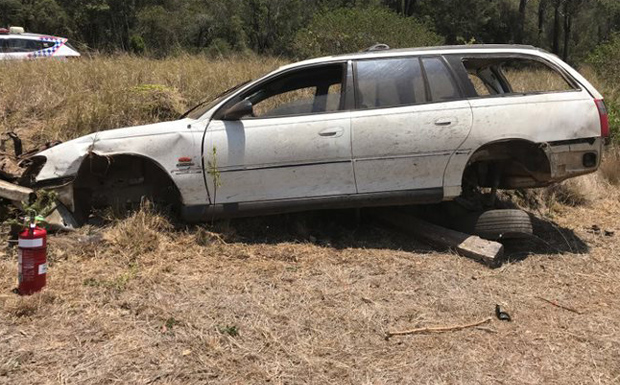 The stationwagon ended up in a paddock beside the D’Aguilar Highway (Photo: RACQ LifeFlight)

A woman was airlifted to hospital in a critical condition after a single-vehicle crash on the D’Aguilar Highway at South Nanango on Sunday morning.

Emergency services were called at 10:16am.

RACQ LifeFlight described the incident as a “high-speed crash”.

The LifeFlight rescue helicopter landed nearby.

Its aeromedical team assisted ambulance paramedics in treating the female passenger of the vehicle, who had suffered multiple injuries.

She was airlifted to the Royal Brisbane & Women’s Hospital in a critical but stable condition.

Paramedics were called to a single vehicle rollover on the Bunya Highway near Bell at 7:43pm on Saturday.

A male in his 30s suffered head, leg and arm injuries.

He was transported in a stable condition to Dalby Hospital and later airlifted to Toowoomba Hospital.