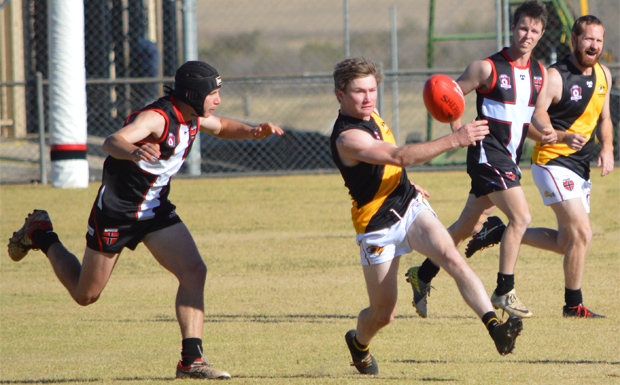 Both the men’s and women’s teams will play on the day, which will be the first time that two Darling Downs AFL teams have played against one another in the Brisbane Valley.

According to Saints president Andrew Foley, both clubs will have something to prove, despite not playing for premiership points.

“In the men’s competition, both teams finished outside the finals last year, so they will both be looking to show some improvement as they come into the season,” Andrew said.

“It won’t be easy, with some of our squad still finishing their cricket commitments.

“With the women’s game, the Tigers have been the competition benchmark for several years, having won multiple premierships.

“So it will be a great hit out for our girls, to test ourselves against the best.

“We appreciate the Tigers giving us this opportunity and allowing us to see where we are at, and what we need to work on as the season goes on.

“It will be competitive footy in both games, and we hope to make a good account of ourselves”.

For the Saints, playing in the Brisbane Valley has another purpose.

“The junior club that plays at Fernvale, Brisbane Valley, has been very keen to get some senior football on their ground and we are more than happy to help them out,” Foley said.

“While there are metropolitan clubs in Brisbane and Ipswich that are closer to Fernvale than the South Burnett, we are a country club and believe that prospective players and supporters living in the Brisbane Valley may like to get on board with us.

“So any of them, playing or non-playing, are welcome to come to the game at Fernvale and make themselves known”, he said.

“Hopefully, we can grow a bit of base in the region and continue to take a game there in future years.

“Who knows? If there is interest, we may even try to take a game to Fernvale for premiership points in 2020.”

New members are always welcome at the Saints and interested people should contact the club by email.

The Fernvale matches will held at Fernvale Sports Park in Brouff Road, beginning at 1:30pm with the women’s game and followed by the men’s match at 3:00pm.