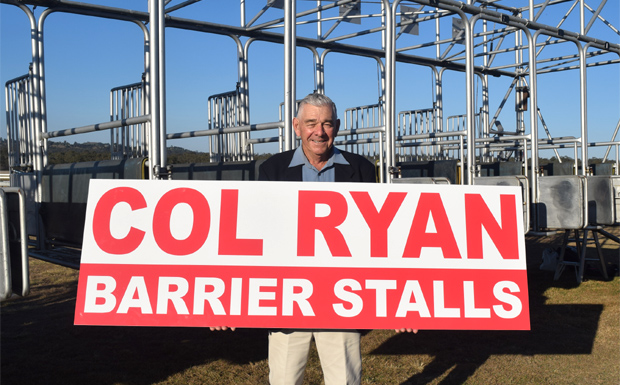 Veteran starter Col Ryan, who served the Nanango Race Club for more than 35 years, had the club’s barriers named in his honour in 2015

A personal tribute by Ross Stanley:

On countless occasions over the decades, Colin Ryan would return to the enclosure after a race at Nanango and give off the slightest of quirky grins as he approached.

We both knew exactly what the smile meant.

As starter, he had just sent a dozen or so horses away from the gates in a perfect line.

His expertise was great for racing but a nightmare for a racecaller.

Uneven breaks make a commentator’s job easier as there are some clear sets of colours to concentrate on while the field sorts itself out.

I was, of course, delighted for Col and his team that their professionalism and determination was being rewarded.

The squad developed an enviable record of successfully getting almost every entrant into the starting stalls.

This success was no fluke because Col’s approach won horses over.

It was, in the main, a pat and his gentle manner that gained the thoroughbred’s confidence and co-operation.

I vividly recall his opinion of a visiting starter who was inclined to promptly resort to a flick or two of the stockwhip, and order late scratchings quite quickly when his power strategy failed.

Col didn’t suffer fools and I don’t believe the expert ever attempted to give Col advice again.

As a city slicker, I relished learning about cattle through conversations with Col.

Again, his methods revolved around a natural affinity with the animal and his deep knowledge of behaviours gathered over a lifetime.

I recall doing a magazine article quite some years ago about Col’s artistry as a starter.

His modesty stood out as he stressed it was a team effort … and he was right, of course.

He was not a boaster, but clearly he was a good chief who modelled methods for his support staff.

Another point I remember was the risk minimisation Col practised.

He never wanted his assistants to enter the stall while leading a runner, because he was concerned they could be pinned against the front gate if a galloper took fright.

Col also liked to be on the stand as the last horse was going in so he could let them go before restlessness became an issue.

Col’s association with local racing went back to Nanango’s re-opening day in 1968.

He was a long-serving vice-president of the race club, and his contribution was later recognised with the award of a life membership.

The club named its starting stalls in his honour in 2015.

Col was ever the gentleman, acting with dignity and respect – a wonderful family man and industriously dedicated to any cause or project he took on.

It must be said that he was a popular favourite with the staff at the treatment centre at the Wesley Hospital during his recent illness.

He was perennially positive, cheerful and appreciative of their efforts.

Col loved to find a winner, and you can bet on this certainty: Anyone who watched him working with animals was certainly richer for the experience.

Many can count it as a blessing that he was part of their lives in some way. 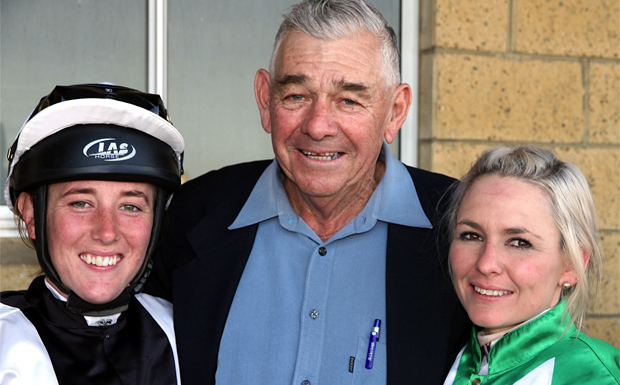 Hannah Phillips, Col Ryan and Hannah English caught up with each other at Lee Park on Nanango Cup Day in August 2015 (Photo: Ross Stanley)