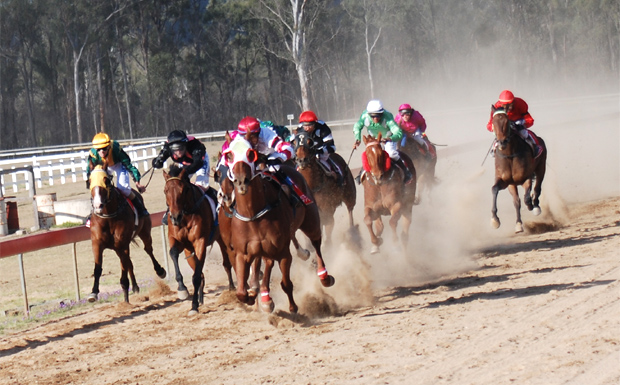 FLASHBACK: Sarah Eilbeck, in the red and white silks, leads the field home aboard top-weight Aashiq in the 2014 Wondai Cup

The 2018 renewal of the Wondai Cup on October 20 coincides as usual with the running of the Caulfield Cup, the first leg of the time-honoured double that the Melbourne Cup completes on November 6.

This Victorian carnival may well see the largest northern hemisphere representation ever to vie for the Spring’s treasure chests.

There are two sets of candidates, namely the invading contingent that makes Werribee its temporary home and the imported bloodstock that now lodge with Australian stables.

Racing is the epitome of free enterprise. Although the overseas influence is very understandable, its emerging dominance in traditionally major events is rued by many.

Back in 2014, the Wondai Cup had a couple global touches.

The winner was Aashiq, the son of General Nediym that was knocked down for $90,000 as a yearling to David Hayes, the trainer who took out Caulfield Cups with the American-bred Tawqeet and Fraar, and Boom Time, the local product. Jeune, his English-born charge, captured his only Flemington two-mile Cup to date.

Aashiq, after failing to really kick on following a narrow defeat in the VRC Maribyrnong Plate, was on-sold to Jason Judge, the Toowoomba trainer whose previous stamping ground had been at Dirranbandi.

For the Wondai Cup, that true-blue Australian conditioner teamed up with apprentice Sarah Eilbeck, a rider with a rare background.

The English lass’s only tie up with thoroughbreds was when she watched them parade past her family’s home at Greystoke in Cumbria.

Wonder what interesting tale will be behind the Roy and Glenis Radunz Wondai Cup victor this time around? 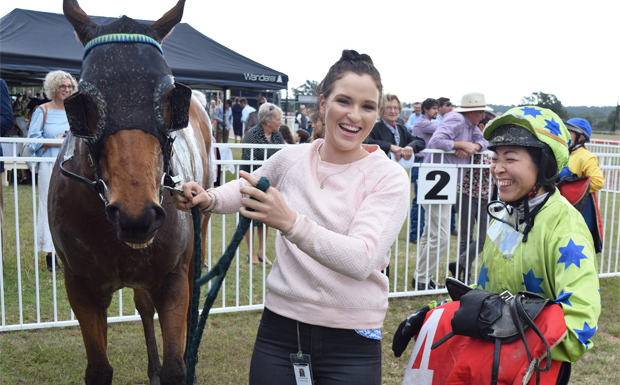 Wondai’s theme for the popular fashion contests is Flowers and Fascinators.

It is great to note that two new sponsors are supporting the racing.

The Kingaroy RSL, the modern venue on the corner of Markwell and Short streets, and Harley and Lauren O’Neill’s Harley Heavy Diesel (HDD), the East Street Wondai business that specialises with maintenance and repairs for heavy vehicles, equipment and farm machinery, are stepping up to the mark.

A returning backer is G (for Glyn) Crumpton and Sons, the long-established peanut growers, processors, retailers and wholesalers located at Crawford.

Race sponsors are rewarded with an ideal base in the mall of mini-marquees adjacent to the outside rail.

Two Murgon businesses, namely oriGINAl Hair by Gina and Thompson Plumbing and Gas have come to the party with sponsorship of the race club’s stubby holders.

A Possible Jagged End Of The Everest

While it is an unlikely eventuality, the use of the six emergencies for The Everest on October 13 raises a couple of questions.

The batch is drawn from acceptors for the $500,000 Sydney Stakes (WFA, 1200m) that is run on the same day at Randwick. If selected, the horse must start in The Everest.

So what happens if, say, English or Incredible Star recover fully from the lameness that triggered their dropping from The Everest line-up, become a Sydney Stakes contender, and get a spot because of a scratching. Are all the earlier bets valid again?

Hopefully that scenario has been covered in the race conditions.

Noticeably, the first five home earn $600,000 which equates with the cost to the slot buyer. The deals done with the owners of the chosen horse are private so it is not possible to discern which slot owners end up with a profit.

For the second rendition of The Pegasus in America early this year, the proprietors were left with three unsold slots and had to quickly do their own bidding to secure a full field. The Australian version factored in a degree of solidity by requiring $1.8 million per slot to cover the first three editions.

Luck will be worth a fortune.