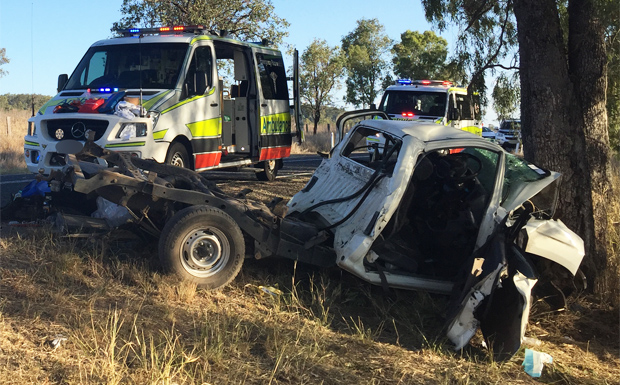 Emergency services at the scene of the crash on the Murgon-Gayndah Road, north of Windera State School (Photo: RACQ LifeFlight)

A man, aged in his 20s, has been airlifted to hospital in a critical condition following a single-vehicle crash on the Murgon-Gayndah Road near Windera on Wednesday afternoon.

Emergency services were called to the incident near Davis Road (north of Windera State School) about 3:00pm.

The man’s vehicle left the road and smashed into a tree, trapping him inside.

A QAS spokesperson said the man had suspected head and abdominal injuries, a leg injury and precautions were taken in case of spinal injuries.

The Bundaberg-based RACQ LifeFlight helicopter landed nearby and flew the man to the Royal Brisbane and Women’s Hospital for treatment.