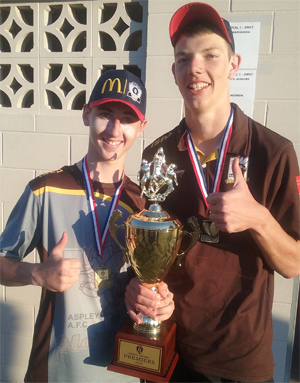 Shaun Pukallus, from Kingaroy, and James Packer, from Hodgleigh, play for the Aspley Hornets.

Their Grand Final against the Morningside Black Panthers was played at Yeronga on Sunday.

The Hornets, who finished in fourth spot on the ladder, had a tough journey through the finals to earn a spot in the Grand Final.

Aspley went into the game as underdogs.

The teams had met twice before during the season, with Morningside recording decisive wins on each occasion.

However, the Hornets began strongly on Sunday and finished the first quarter ahead by two goals.

Shaun, a ruckman, and James, a midfielder, have been travelling to Brisbane weekly to train and then returning at the weekend for games.

They both formerly played junior AFL with the South Burnett Saints.