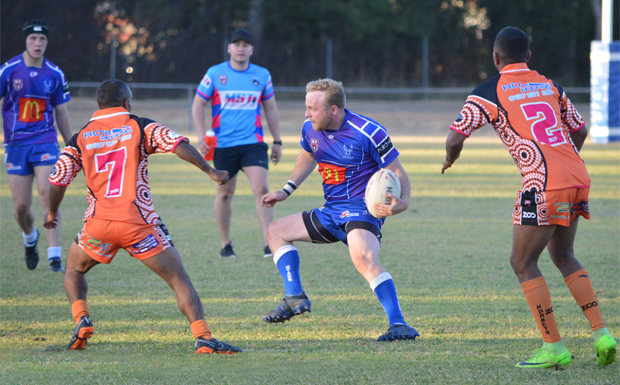 Nanango defeated Cherbourg 50-30 in their last game of the regular season, played on August 4 … the Stags had a bye last weekend and won’t be back in action again until August 18 in the Major Semi-Final

South Burnett rugby league teams have a week off – and an opportunity to relax at their Presentation Dinner in Murgon on Saturday night – after the final round of fixtures games was played last weekend.

In U12s, Murgon finished on top of the ladder, just two points ahead of Cherbourg.

In U16s, Nanango finished four points ahead of Chinchilla.

In A Grade, Nanango also finished on top of the table, two points clear of Kingaroy. The senior Stags were dominant all year, suffering just one loss  (22-20 to Kingaroy in Round 3).

The Semi-Finals in the South Burnett competition will be played at Cherbourg on Saturday, August 25:

In the Toowoomba Rugby League U18s competition, the South Burnett Eagles – who finished in fifth spot on the ladder – faced Souths at Glenholme Park in a sudden-death finals game played at Toowoomba on Sunday.

A win would have seen them through to the Major Semi-Finals but unfortunately for their season’s hopes, the Eagles were defeated 42-16.

The U14s Women’s Eagles didn’t make it through to the finals series in their combined South Burnett / Beachmere team in the Sunshine Coast RL competition but went out on a win in the final fixtures round played on August 3, defeating Gympie / Hervey Bay 48-8.

After finishing in 2nd spot on the table, the U16s Women’s Eagles went down 22-6 against Caboolture in their final played on August 10.  But the girls live to fight again. They will face Nambour / Noosa on August 25 in the sudden-death Preliminary Final of the Sunshine Coast competition.

The U18s Women’s Eagles were knocked out of the Sunshine Coast competition in the first round of the finals in a close game against Nambour, going down 12-10.