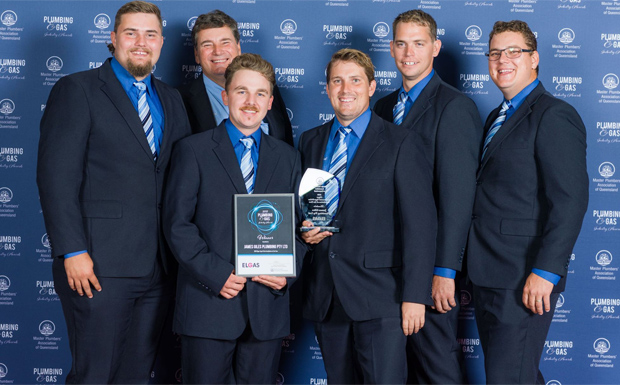 Goomeri-based James Giles Plumbing has taken out a major award at this year’s Queensland Plumbing and Gas Industry Awards in Brisbane … the fourth year in a row the company has returned home with a key trophy from the awards night.

The industry celebration, hosted by the Master Plumbers’ Association of Queensland. was held on July 20 at the Brisbane Convention and Exhibition Centre.

James Giles Plumbing was presented with the “Commercial Type B Gas Installation of the Year” award for a complex, new gas system installation at Bushman Tanks in Dalby.

The appliances had to be dismantled, moved, rebuilt with large modifications, and the gas burners and valve sets converted to suit LPG.

The judges said that despite a very significant workload – and a vehicle crash which occurred during the project in which Justin and Michael Giles were injured – production remained uncompromised with outstanding workmanship.

In 2015 and 2016, the company won “Best Commercial And Industrial Gas Install Of The Year” awards.