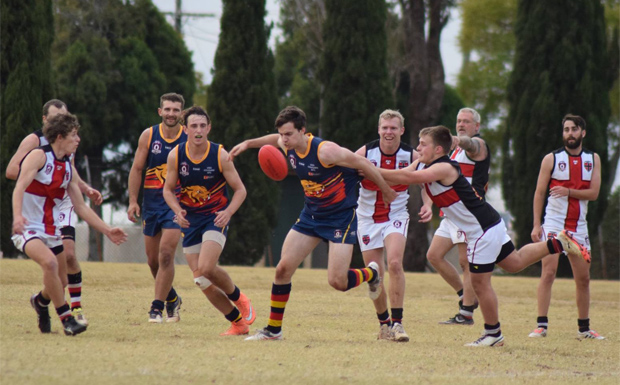 Competition leaders USQ Cougars proved too strong at the end for the South Burnett Saints in their Darling Downs AFL game played in Toowoomba on Saturday.

The game began evenly enough, with Cougars just one goal ahead at the end of the first quarter.

The scoreline blew out in the the last quarter, with Cougars keeping the Saints goalless, although the visitors did land two behinds.

Despite the loss, Saints are still holding down third spot on the ladder.

The Saints’ women’s team also had a hard day at the office, kicking just two points in their match against the Cougars’ women.

The South Burnett men’s next game is scheduled to be against the sixth-placed Warwick Redbacks at Warwick on July 14.

The Saints’ women also have a break until July 14, when they will face South Toowoomba in Toowoomba.

Footnote: The Saints’ annual Heritage Round, when players break out their old Kingaroy Bulldogs’ jumpers, will be played at Lyle Vidler Oval in Kingaroy on August 4.