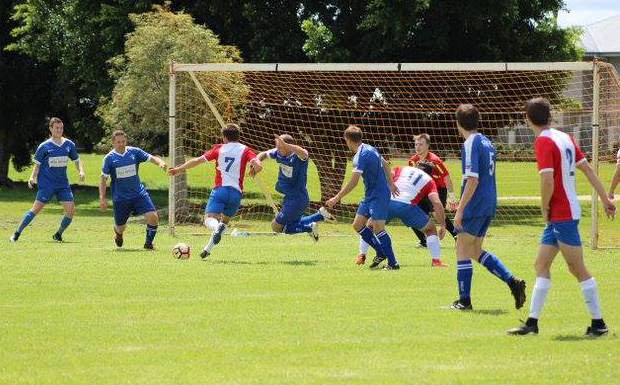 FLASHBACK: South Burnett United in action against Dalby; the South Burnett team are doing very well in the Toowoomba competition, but the departure of the region’s top players to join United has left the local competition feeling a little flat this year (Photo: Troy Schultz)

This year’s Football South Burnett soccer competition has been dogged by the loss of many of its top players to South Burnett United.

United is playing in the Toowoomba Football League and signed up the cream of the crop from all four local teams to form its 2018 squad.

They are now showing the rest of the TFL teams just how much football talent the South Burnett really possesses, sitting at (or near) the top of the table all season.

While this is good for regional pride and produces some genuinely thrilling matches when at-home games are played, the side effect is that a lack of depth in the local ranks has produced a few unfortunate outcomes.

And a second problem – for the Panthers men’s team, in particular – is that so many of their former players have donned United’s colours they have been unable to muster a full complement for this season’s matches.

This has led to the curious position where a side that took out the past five 1st Division premierships is now a cellar dweller that has failed to rack up a single point so far this year.

The shortage of skilled, seasoned players has also produced some lacklustre games for spectators in the first six rounds.

But Football South Burnett stands by its decision to enter the Toowoomba competition.

They believe it’s important to offer talented players a clear upward pathway through the sport, from junior level right through to pan-regional competition and beyond.

Over the longer term, they believe this will encourage more youngsters to take up the sport and stick with it, knowing their talent can take them far if they intend to pursue it.

Officials are also philosophical about the impact the decision has had on the local competition, arguing the absence of top players this year will give local up-and-coming talents some breathing room to develop their own skills.

They believe the best players will mature faster, motivated by the knowledge that if they get good quickly United may take them aboard in future, too.

There’s a lot to be said for these views, even if it’s made Saturdays a little less exciting in 2018 than they were in previous years.

But only time will tell if they’re right. 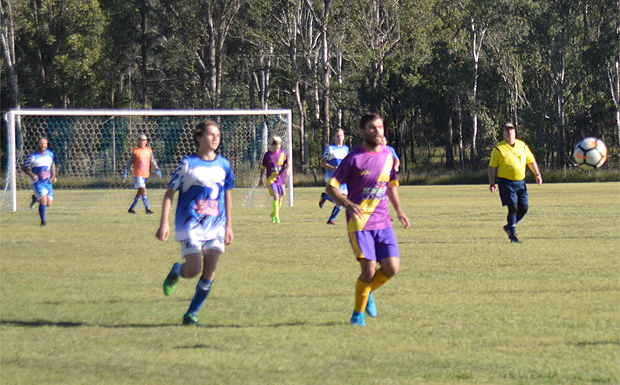 Panthers and Gunners faced off at Nanango last Saturday … sadly, it was not the Panthers’ turn to shine

Last week, two of the matches originally scheduled to be played on Saturday were played on Friday night so members of some teams could attend other commitments.

Both rescheduled matches were played at Tom Alford Oval in Kingaroy, kicking off with a Women’s Division clash between Panthers and Gunnettes.

Panthers took the match 3-nil, courtesy of goals by Lauren Sims, Jess Erlich and Jo Downie, to hold their unbeaten position so far this season.

They were followed on to the park by Wests and Barambah in the Men’s Division, with Wests triumphing over the Bears 6-2 thanks to goals by Chaz Fuller, Ryan McCabe (2), Thomas Carroll and Caleb Jenkins (2).

Barambah’s Kade Buckle and Brendan Kelly both found the back of Wests’ net – in fact, Kade Buckle drew the first blood of the night just seven minutes in – but their efforts were not enough to secure any points for the Bears.

On Saturday, the remaining two teams played their scheduled matches, one at Nanango and the other at Kingaroy.

In Nanango, Panthers played Gunners in the Men’s Division; Nanango lost 3-nil against goals by Nigel Kaiulo (2) and Adrian Watt.

In Kingaroy, Wests played Barambah in a Women’s Division match which saw a 1-all draw.

Hannah Armstrong opened the account for Wests in the 33rd minute, but Courtney Thompson found an equaliser for the Bears in the 60th.

In the Toowoomba Football League, South Burnett United will be having a bye this weekend.

But the local squad will be back in action in a fortnight when they play Highfields at Commonwealth Oval in North Toowoomba on Sunday, May 27.

The following week United will play the Dalby Tigers at Dalby (June 3); and a fortnight after that, the Gatton Redbacks at Gatton (June 17), then the Rockville Rovers in Toowoomba (June 24).

But happy days will return for local supporters on Saturday, June 30, with a home game at Tom Alford Oval on June 15 when United play Rockville Rovers in Round 15.

The Interclub is an annual contest played between Kingaroy, Nanango and Barambah’s U12s/13s and Cadets squads against parallel teams from Dalby and Chinchilla over five match days.

Each team plays its opponents twice during the course of the competition, accumulating three points for a win, one for a draw, and nothing for a loss.

The competition – now in its fourth year – provides an opportunity for older players to gain experience by playing against opponents they’re unfamiliar with.

Players tackle shorter-than-usual matches, with the U12s/13s playing 25-minute games and Cadets playing two 20-minute halves, to ensure each team can play two games each round.

Football South Burnett’s local competition table after Round 6 wrapped up last Saturday (Note: Barambah and Nanango still have a match to play in the Men’s Division)

The local competition will be a taking a one-week break this Saturday, May 19, to contest the annual President’s Cup.

The Cup is played between the top two teams in each division after the sixth round of each season’s competition as a break from the normal schedule.

On points, Kingaroy men’s teams Wests and Gunners currently sit at equal first on the ladder, so the match could really be anybody’s and promises to be an edge-of-the-seat game for fans.

In the women’s division, Nanango’s Panthers lead Barambah by a margin of 18 to 10 at the moment, but the Bears have a long history of steadily improving as each season progresses.

So while the formidable lady Panthers will likely go into Saturday’s Cup game as favourites, the Bears shouldn’t be discounted – this match is capable of delivering a surprise upset.

Both games will be played at Tom Alford Oval in Kingaroy, with the Women’s Division hitting the park at 4:00pm, followed by the Men’s Division match under lights at 6:00pm.

A canteen will be operating in the grounds and spectators are very welcome.