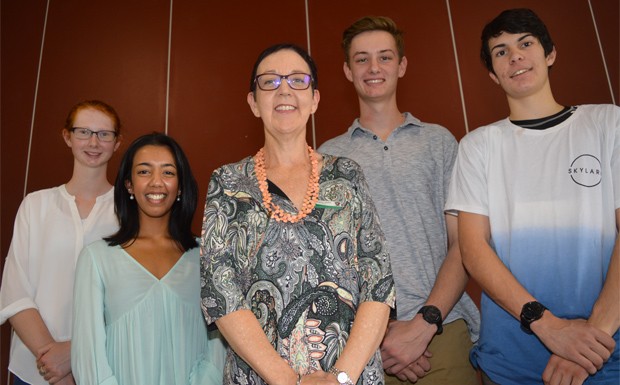 St Mary’s Catholic College’s top achieving graduates from 2017 returned to the school on Monday to share their study tips with current Year 6-12 students.

Josh Soley achieved an OP1 and is now studying Engineering at the University of Queensland.

Chris Janz (OP2) is studying Engineering and Maths at UQ; Sajeewa Ranasinghe (0P4) is doing Law / Justice at the Queensland University of Technology; and Georgia Reeve (OP5) is with the RAAF at Wagga Wagga.

School Principal Angela Myles said the four former students had shared advice with the students about how to get through Year 12.

“It was also an opportunity for the school to congratulate and applaud them on their success,” she said.

“We are very proud of them as they all worked very hard.

“Josh said he spent about 30 hours a week studying on top of his part-time job.”

Each student was presented with a gift bag from the school, filled with South Burnett memorabilia.