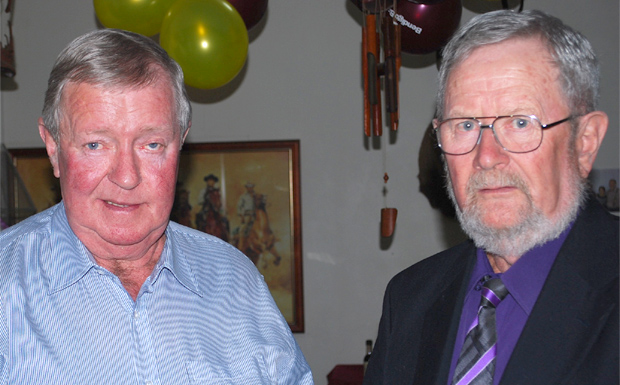 Wayne Emms was congratulated by former Rosalie mayor Noel Strohfeld for 'a job well done' in establishing a branch of the Bendigo Community Bank in Yarraman at his farewell in 2014
(Photo: Jim Bond)

A funeral Mass will be held in Yarraman on Friday, December 9 for well-known local resident and Yarraman Bowls Club president Wayne Emms, who died on Friday night.

The Requiem Mass will be celebrated from 10:30am at Our Lady Of Dolours Catholic Church.

The well-known businessman was the founding chairman of the Bendigo Community Bank in the South Burnett and served for many years on its Board.

The Yarraman Bendigo branch opened in 2005, followed by branches at Blackbutt and Nanango.

Mr Emms resigned from Board duties in 2014 and enjoyed a big farewell organised by his colleagues.

He was also formerly president of the Yarraman Community Council.

For many years Mr Emms and his wife Marie ran a small business, “Timbits Stable”, on the southern edge on Yarraman which specialised in wooden rocking horses and hobby horses plus children’s wooden furniture and toys.

He is survived by his wife Marie, children Gerard, Simon, Sarah, Shaun and Jim, and six grandchildren.