100 Years Ago Mick Went To War 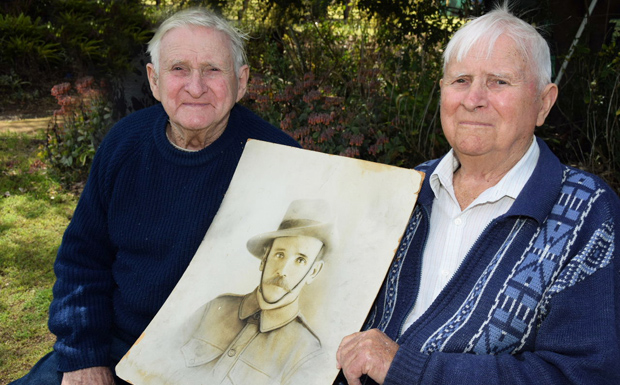 Jim, 90, and Maurice Mangan, 89, with a sketch of their father, Gallipoli veteran Mick
(Photo: Clive Lowe)

Do you have a photograph of a South Burnett Anzac?

Throughout the South Burnett people are beginning to retrieve memorabilia from World War I which may have been stored away in family repositories for a very long time.

This is of special interest to local historians who are gathering the information to record and preserve our South Burnett history.

The call is out for any diaries, letters, postcards, documents or other items of interest pertaining to South Burnett men and women who served during World War I.

In particular, Robyn Petersen and Daun Clapperton are attempting to build a photographic dossier of South Burnett soldiers to add to their data base of 1200 men and a small number of nurses.

Liz Caffery is also compiling a photo history of soldiers whose names are listed on the Nanango cenotaph. Her project requires images such a photos, sketches and postcards as well as written information. Liz can be contacted on 0488-631-149.

“Please help us preserve and honour this very important part of our local history. Items will be treated with utmost care and returned promptly after scanning.”

One Hundred Years Ago Mick Mangan Enlisted For War 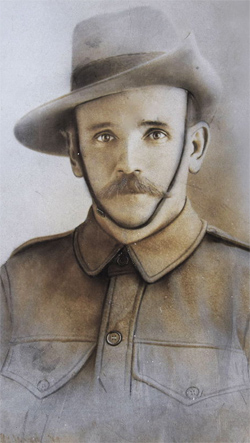 Within six weeks of the declaration of World War I, Michael (Mick) Mangan travelled by train from his home near Nanango to Maryborough.

Here, he enlisted to join the Australian Imperial Force for service abroad in World War I.

On September 19, 1914, he signed his attestation paper which stated that he was a farmer, single, aged 33 ½ years of age. So began four long, gruelling years of battle which took him from Gallipoli in Turkey and then to the Western Front in France and Belgium before he returned home at the end of 1918.

On his return from the Western Front, Mick carried with him some vivid and horrific memories of his four years at war.

While he spoke infrequently about these experiences, there were times when he did relate several graphic episodes to his children. His son, James (Jim) Mangan posed the question: “I’ve often wondered why he did tell us some of those gruesome stories. He never observed Anzac Day commemorations.”

Some of the stories Jim remembers most explicitly relate to his father’s time in Gallipoli.

At dawn on Sunday, April 25, 1915, 36 boats carrying the first wave of Australian soldiers, rowed towards the shore of a beach, later known as Anzac Cove.

It was a place called Gallipoli and it marked the beginning of the invasion of Ottoman Turkey by the Allied forces; 101 of these “first wave” soldiers were killed that day and another 650 perished before the day was over.

Some were hit while still in the boats or as they tried to cross the beach and scramble up the treacherous terrain that lay in front of them.

For most of that day, Michael Mangan and soldiers of the 15th waited offshore in a battleship, ready to take their place in the small boats to be towed closer to the landing area before rowing the final distance.

They landed late in the afternoon of April 25 and immediately attempted to climb the steep ridge above a valley (later known as Monash Valley).

Within a few days, three Nanango men from the 15th had died: Corporal Norman Rushforth, 26, was killed on April 26 and lies in Shrapnel Valley Cemetery; Hider (Stanley) Broome, 22, died of wounds aboard the hospital ship HMAS Mashobra on April 30 and was buried at sea; Lance Corporal Richard Dunsdon, 36, was killed in action on April 30 and buried near Quinn’s Post. The names of Stanley Broome and Richard Dunsdon appear on the Lone Pine Memorial.

Many an Anzac was introduced to war as he moved up these valleys from the beach to the ridges.

For virtually the whole of the campaign, but especially in the early weeks, Turkish snipers killed or wounded hundreds of men in Monash and Shrapnel valleys. The Turks held the high ground and were never driven from it.

Stretcher-bearers, and soldiers bringing up supplies, rations and water, were in constant danger as they made their way along the valley bottom.

The 15th Battalion suffered severe losses during these weeks but was also lauded for achieving some of the finest feats of the Gallipoli campaign.

From May to August, the battalion was heavily involved in establishing and defending the front line of the Anzac beachhead. In August, as part of an assault known as the August Offensive, the 4th Brigade attacked Hill 971, the highest vantage point of the Sari Bair Range.

In the early hours of August 8, three battalions of the 4th Brigade – the 14th, 15th and 16th – set out. Dawn found them nowhere near the approach to Hill 971. As the Australian battalions advanced over an exposed slope, Turkish machine guns opened up.

Charles Bean, the official World War 1 historian was later to record “the attainment of Hill 971 … was never in the range of human possibility”.

Jim recalled the story: “My father told me he and ‘Cobber’ were running across open ground with fixed bayonets towards enemy territory when ‘Cobber’ called out ‘I’ve been hit’ and he went down. He was hit in the groin which severed an artery, a dangerous place to be hit. The blood pumped out and he died without firing a shot.”

An account of that day from a Red Cross file [AWM IDRL 428] also described the scene: “The men fell under furious fire. It was terrible; the men were falling like rabbits… They fell a good way, in many cases, from the Turkish line.”

Two Nanango men from the 15th, Sydney Porter and Robert Renfrew, died the next day. As had happened at Anzac Cove during the landing of April 25, the sheer numbers of wounded overwhelmed the medical services.

The three Australian battalions that had made the assault suffered 765 casualties — the 15th Battalion was reduced to about 30 per cent of its normal strength.

Mick married Hermione Lonergan in 1919 and took up a Soldier Settlement block at South Nanango in 1922. Ahead of him were struggles and hardships of a different kind … 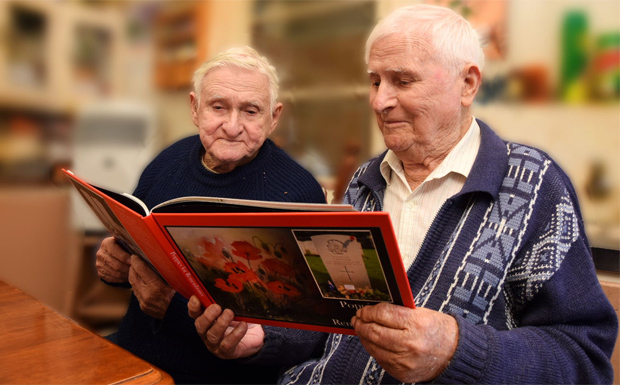 Brothers Jim and Maurice Mangan look through the "Poppies for Remembrance" book which records the South Burnett delegation's visit in May to sites in Belgium where Mick Mangan fought in 1917 (Photo: Clive Lowe)