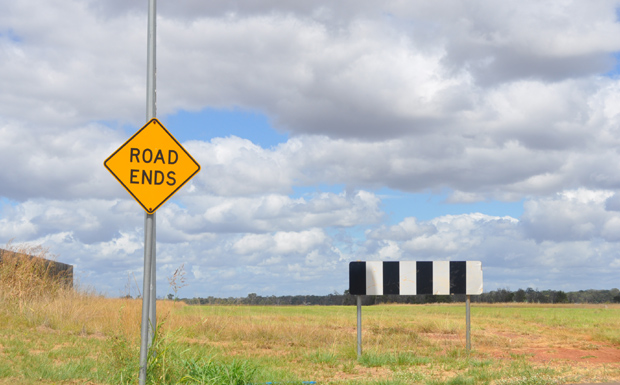 Taabinga Estate ... the developers will need to look at new ideas after their proposal for a 116-lot relocatable home park on their empty land received a thumbs-down from Council this week

The South Burnett Regional Council has narrowly given the thumbs down to a proposal to build a 116-lot “relocatable home park” at Kingaroy’s Taabinga Estate.

At its monthly meeting yesterday, Councillors rejected a development application lodged by Brisbane-based company The Planning Place to convert one of the Estate’s lots into 265 lots, 116 of which would have been used for a relocatable home park.

The application had originally been lodged with the Council late last year, and at its December meeting the SBRC voted to “lay it on the table” until the developers provided additional information about their proposal.

But at yesterday’s meeting, the resubmitted proposal provoked heated debate in the council chambers.

Cr Damien Tessmann – reading from a prepared statement – said he was against the proposal because he thought the idea of building a relocatable home park near the town’s CBD was out of character with Kingaroy’s “country town” image.

He also expressed concerns that in the current flat housing market, the creation of the new park would put further downward pressure on real estate prices and affect the property values of other town residents.

But he said his primary reasons for rejecting the proposal were based on town planning considerations.

“I have no doubt that the developer here is reputable.

“However, I cannot and will not be told what is good for my community by somebody from outside the region bringing an application which is not consistent with what the community has said it would like through the town plan and through the community plan.”

His feelings were echoed by Cr Ros Heit, who said she felt previous studies of the local community had shown that residents wanted Kingaroy to be “a prosperous country town”.

“A relocatable home park would definitely change this country lifestyle image,” she said.

“I am worried that this development may cost us our lifestyle.”

Cr Keith Campbell noted the application had lain on the table for three months and said the developer had done a lot of work to help the council understand their proposal, including a social impact statement and an economic benefits analysis.

While agreeing the proposal fell outside current town planning guidelines, he said it still fell within State guidelines.

“We need to send a message that the South Burnett is open for business,” Cr Campbell said.

“This park would be for people in the 50-plus age range with money who want to live out their retirement years in a low-maintenance home without a mortgage and close to facilities.”

Cr Barry Green said the relocatable home park was a bone of contention.

“Is there really a need for this type of development?” he asked.

“Subjectively, I’m against it. But objectively, if it’s not part of the Town Plan and there’s no need for it, then I must agree with Cr Tessmann.”

Mayor Wayne Kratzmann pointed out that in 2014 there were limited economic development opportunities for country towns.

“We need new residents,” he told the meeting.

“If built correctly, a relocatable home park would be an asset for our area. We have to indicate that we’re pro-business and we can’t be too choosy.”

When the matter was put to a vote, the development application failed to gain approval by 4 votes to 3.