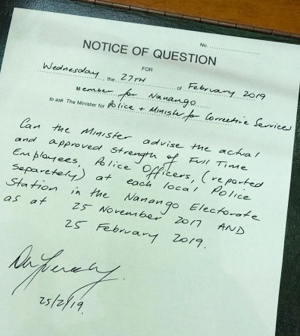 Mrs Frecklington said she had been contacted by concerned community members who have highlighted issues with police levels in their towns.

“It has been raised with me on several occasions that there is a shortage of police right across the South Burnett,” Mrs Frecklington said.

“I know the police in our region are doing their very best, particularly with the crime wave which is still ongoing in Murgon, Cherbourg and Wondai, but if they are dealing with staff shortages, it just makes their jobs even harder.

“I have heard we have police staff being transferred between stations, and some stations are not currently at full strength.

“This is unacceptable and the community needs answers.

“I have asked the Police Minister to advise the actual and approved strength of full-time police officers at each of our local police stations.”

Mrs Frecklington has also sought a comparison of these figures between November 25, 2017, and February 25, 2019.