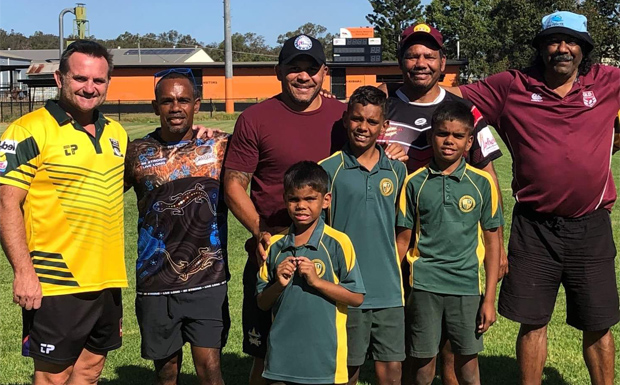 Former State of Origin players Matt Bowen and Craig Teevan travelled to Cherbourg this week to announce the details of a very special rugby league game to be played in February.

The Legends of League game will be played at 5:00pm on February 9 at Jack O’Chin Oval in Cherbourg between the Cherbourg Hornets Allstar Greats and the Murgon Business & Development Association Australian Legends.

Former Australian, Maroons and NRL players will be taking part.

The game is being sponsored by the MBDA and Cherbourg Council.

Details of the Australian Legends team have been revealed (see below).

The players will be in the South Burnett for a few days in the lead-up to the big game, visiting schools and community organisations.

The Hornets Legends team will be announced soon.

The Oakey Redbelly Blacks will also be in action as well as junior matches.