Country Festival Off To A Great Start 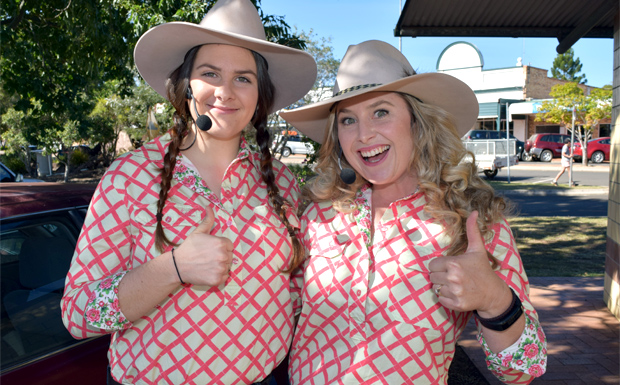 Eden Smith and Cilla Slack from Gayndah were a star attraction with children at the Wondai Country Festival ... Cilla's Blue Gum Farm TV Show proved to be a hit with many parents, too

Wondai’s Coronation Park was packed to capacity on Saturday for the inaugural Wondai Country Festival, and it stayed that way for most of the day.

More than a dozen caravans lined the nearby short-stay caravan parking area, and the newly sealed South Burnett Rail Trail was abuzz with walkers, runners and cyclists taking part in the Festival’s athletic events.

Shoppers could happily browse a bigger-than-usual Wondai Markets for bargains, or relax in front of the Percy Iszlaub Sound Shell for a day of free entertainment that included everything from live music to line dancing and a display of whip-cracking.

Cilla Slack’s Blue Gum Farm TV Show provided entertainment for the children, as did the jumping castles and face painting.

In the afternoon, a Slim Dusty Tribute Concert at the Wondai Town Hall capped everything off, drawing a crowd of more than 100 for a trip down memory lane.

The Country Festival is the brainchild of Wondai Regional Art Gallery curator Elaine Madill, who attended an events workshop last year to get expert advice about how to put on a fun public event.

From there, assisted by a team of Gallery volunteers, the Country Festival began to take shape.

“We wanted to put on something that was inexpensive for families and would offer something for everyone,” Elaine said.

“The advice I had was to start out small and let things build naturally over time, so we used our Wondai Markets as the Festival’s core and things quickly snowballed from that.”

CROW-FM station manager Chris “Corky” Corcoran volunteered to be compere, and entertainers and local school and community groups also put up their hands to help.

The South Burnett Regional Council also pitched in, providing a small grant to help the event find its feet and cover a number of set-up costs.

The end result, Elaine said, was “a marvellous success” that was a tribute to all the volunteers who had worked so hard to bring a new event to Wondai.

“We had perfect weather on Saturday – not too hot, not too cool – and everything went pretty much like clockwork,” she said.

“Everyone seemed to be having a really good time, and the atmosphere was very lively and upbeat.”

Elaine said everyone involved was pleased with the outcome, and she looked forward to making the Country Festival one of the South Burnett’s annual winter events. 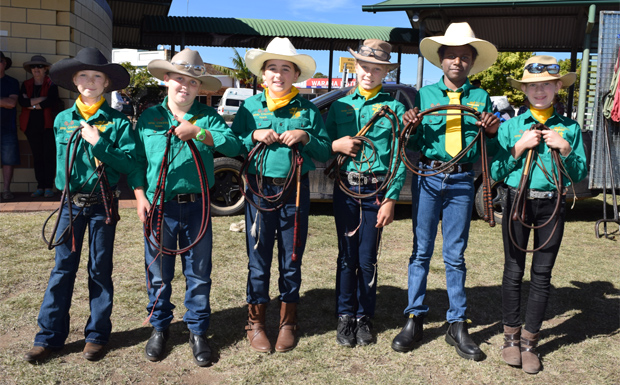 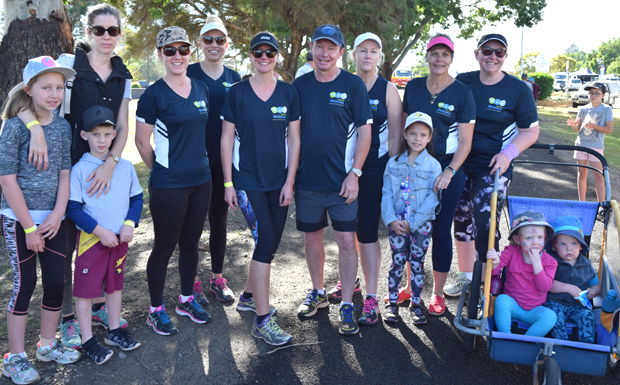 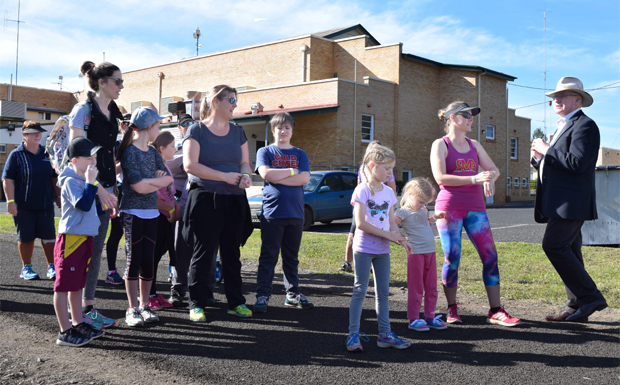 Walkers and runners received a pep talk from Mayor Keith Campbell before the 8km and 4km events got underway ... keen athletes took the longer course, but many more took the shorter one 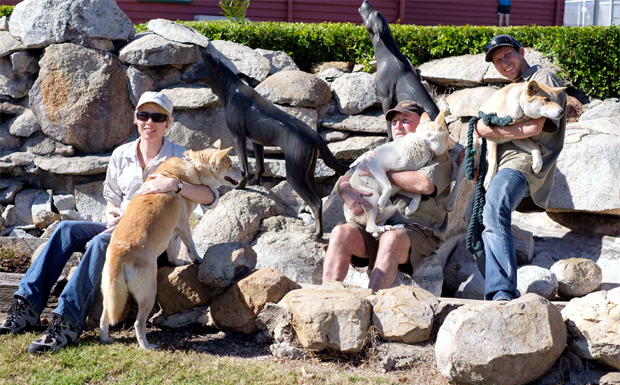 Another attraction at the Country Festival was Dingo Simon, (centre), from the Durong Dingo Sanctuary, who brought along three dingoes for the day; later, Simon took his dingoes to see Wondai's famous dingo statues (Photo: DDS) 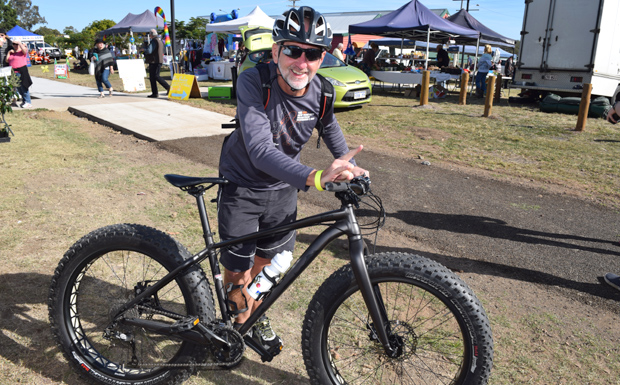 Zeglar Fergus, from Brisbane, was house-sitting in Gympie for a friend when he heard about the Country Fair's Fun Ride and decided to take part; his bike is fitted with Alaskan snow wheels which he usually fits for beach rides 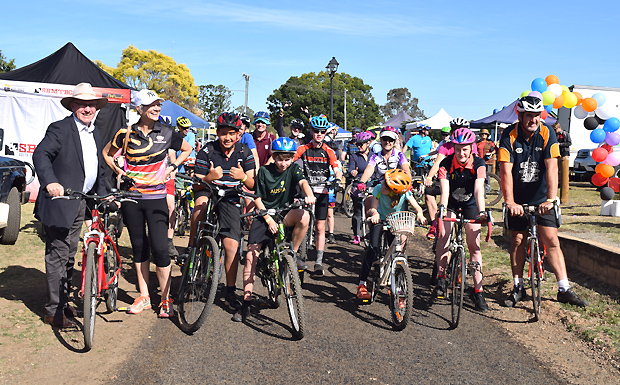 Once all the runners and walkers were off, riders taking part in the Fun Ride to Barambah Creek were assembled for another pep talk ... 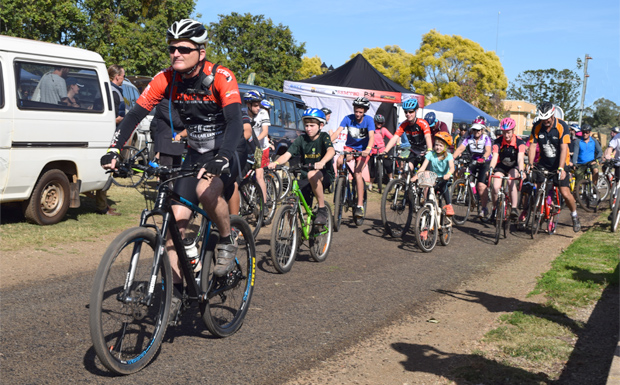 ... and then they were off, led by Jason Wyeth from the South Burnett Mountain Bike Club who'll be using the Rail Trail for part of a 10-person Relay For Life team ride later this year 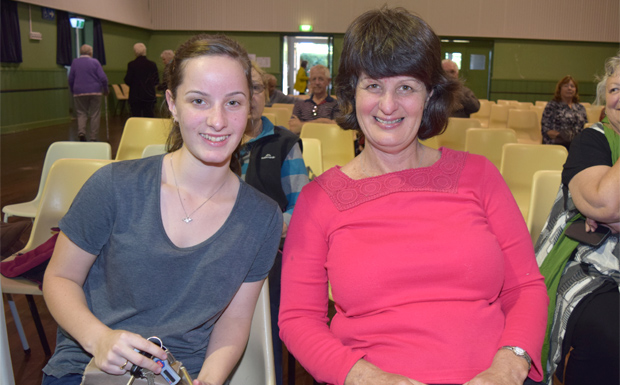 The Festival was capped off by a Slim Dusty Tribute Concert in the afternoon ... and Lydia and Carolyn Partridge, from Redcliffe, were among the first to grab seats because their family is related to Slim Dusty; Carolyn was born in Wondai and her mother still lives in Murgon