My wife is of Hungarian and German heritage. Growing up, she relished visits to her Grandfather’s home to indulge in all manner of Hungarian culinary delights.

The corner-stone of this Central European cuisine is a distinctive blend of spices, of which paprika is ‘King’.

There are very few aromas that beat the combination of onion, garlic and paprika frying in a pan.

This simple combination of ingredients results in a depth of savoury flavour that is uniquely Hungarian.

Paprika is the name commonly given to a wide selection of red powders, ground from various members of the chilli pepper family.

Although there are many grades of paprika, they often share similar flavour characteristics such as sweet, savoury and subtle warmth.

The differences in colour depth are due to the amount of ‘Capsanthin’ found in the ripe chilli pepper. And the scale of heat is dictated by the quantity of ‘Capsaicin’ which is found in the seeds.

The non-spicy, sweeter paprika is made by grinding the dried chilli flesh without seeds, while spicy paprika contains varying quantities of dried flesh and the chilli seeds.

Paprika’s delicate flavour has the ability to compliment other ingredients without overpowering or dominating them.

The spice is used as a seasoning in many recipes such as soups, stews, rice dishes and sausage fillings.

If you are unfamiliar with paprika, a great way to introduce it to your dinner table is as a simple seasoning for homemade French fries or generously sprinkled on steaks, lamb chops, grilled chicken or fish fillets.

However, the world’s most famous paprika flavoured dish would have to be Hungarian Goulash.

Most people recognise Goulash as a stew, and that’s how it is mostly prepared nowadays, but it was originally a soup.

Here’s how to make it: 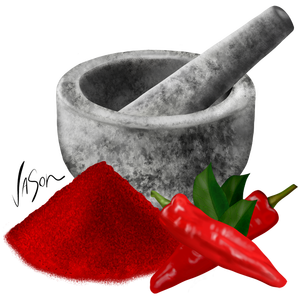 One thing Hungarians are passionate about, is cooking. And, my wife’s late grandfather was no exception. My fondest memory of him will always be the Goulash he cooked in a camp oven suspended over an open fire.

No matter how stealthily I tried to find out his cooking secrets, he always knew what I was up to and would rarely share his recipes. He even went as far as physically removing me from his kitchen while he was cooking – all in good fun, though!

Here is my personal goulash recipe, not quite the same as the genuine article, but it’s reasonably quick, easy and great soul food for the cooler winter months.

Goulash is delicious served with creamy mashed potato or dumplings.