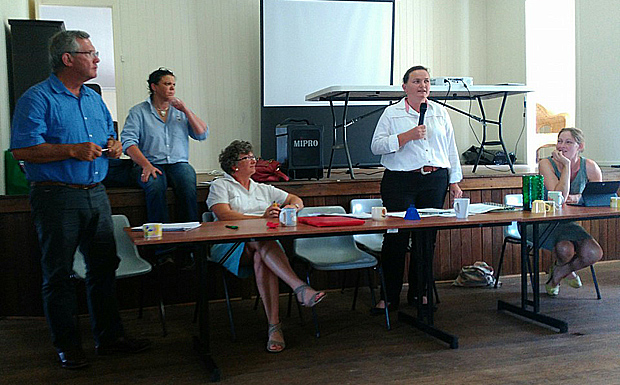 Speakers at the tick line meeting held at Durong on Saturday (Photo: Sarah Due, AgForce)

Pressure from farmers and the LNP Opposition has paid off, with the State Government set to announce an extension to the time for consultations on proposed changes to the Queensland tick line.

The deadline for submissions was originally set for January 31, but Agriculture Minister Leanne Donaldson will announce on Tuesday morning that this has now been extended to February 29.

Mrs Donaldson plans to meet AgForce representatives in Kingaroy on Tuesday afternoon, following meetings in Stanthorpe and Toowoomba where the tick line proposals will also be discussed.

A meeting of cattle producers held at Durong on Saturday called for an extension of a least a month to properly consider the three tick line options which have been put forward by the State Government.

Shadow Agriculture Minister – and Member for Nanango – Deb Frecklington also called for an extension of time earlier this month.

It was one of a number of producer meetings held across the State.

Ms Stanmore said farmers from Coolabunia to the Auburn River and Chinchilla to Kilkivan had attended the meeting, which ran from 10:00am to 4:00pm with only a short break for lunch.

She said the tick line was a major issue for the local community and there were some strong opinions expressed.

“Everyone said their piece. I wanted to allow everyone to have their say from the floor,” Ms Stanmore said.

“The general feeling was that the line shouldn’t move at all. We have been holding it up for so long.”

Ms Stanmore said late in the day it became apparent that the third option for the tick line – the so-called bitumen route which follows major roads – wasn’t fixed in concrete by the State Government and local amendments could be made.

She said this had not been made clear earlier, and was another reason why more time for consultations should be allowed.

The meeting passed a resolution to ask the State Government to extend the deadline to the end of February to consider the proposals.

Ms Stanmore was critical of the lack of consultation by the State Government before the three options were released.

“They should have done the community consultations first,” she said.

She said if AgForce had not organised the Durong meeting there could have been no consultations at all.

“Luckily enough we did it,” she said.

A group of Coolabunia primary producers is drafting a petition to the State Government seeking that the tick line section running through their area remain as is.

Groups in other areas have also been planning urgent meetings.

The Boondooma Tick Committee, the Auburn River Tick Eradication Group and Monogorilby area group are all believed to have meetings planned soon.

Meetings are also planned at Moura, Springsure and Alpha.

Farmers in the Taroom area met on Sunday.

The State Government had planned to implement the tick line changes by July 1. It has already announced that the current control zone between clean and ticky country will be abolished.

On Monday afternoon, Mrs Frecklington accused Agriculture Minister Leanne Donaldson of “attempting to slip into Kingaroy” on Tuesday for a “closed meeting”.

“I’m disappointed because this is a major issue for our region,” she said.

“It really is a bit sneaky.

“The Minister should be holding open meetings for all graziers and landholders who want to attend. She shouldn’t be trying to sneak into town unannounced to all but a selected few.”

Mrs Frecklington said hundreds of landholders stood to be affected by the government’s proposed changes “but apparently their views didn’t matter”.

She has previously criticised the State Government for holding the consultation period over the Christmas / New Year holiday break and for releasing the maps online when not everyone in rural areas has access to high-speed internet.

“This is exactly what the industry wants and in AgForce we are very appreciative that the Minister has responded so positively to our concerns,” he said.

“I am confident through consultation and collaboration we can get the best outcome for the industry.”

Mrs Donaldson said it was important to give producers enough time to have their say.

She said written submissions could be made to the Department of Agriculture and Fisheries, GPO Box 46, Brisbane, 4001; and hard copies of the survey could be accessed by calling the department’s customer service centre on 13-25-23.

AgForce At The Durong & Taroom Tick Line Meetings – (Video by Sarah Due, AgForce)