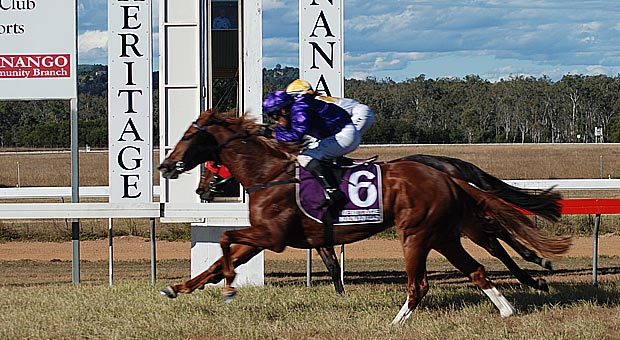 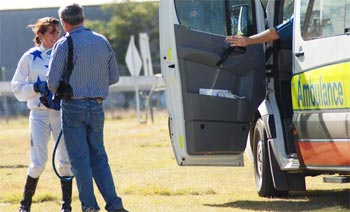 Tomarra Serjeant after stepping from the ambulance

A good crowd enjoyed some close racing at the “Doomben Cup” meeting held at Nanango on Saturday.

Apprentice jockey Tomarra Serjeant was lucky to escape injury in Race 1 when she was dislodged from her mount Makalon prior to the home turn. Makolon continued riderless to the finishing post.

The crowd let out a collective sigh of relief when Tomarra stepped from the ambulance unscathed after she hitched a ride back to the mounting yard.

Tomarra continued racing, and brought home the second placegetter Cards’n’Owls in Race 3 and a third, Extreme Mover, in Race 4.

Ray Hancock followed up on his winning form at Burrandowan by riding a double: Love That Chick in Race 4 and Kamarah in Race 5.

The meeting also proved memorable for Shannon Apthorpe who had success in four of the five races on the card. He had an easy win on Lillabelle in Race 1, followed by two thirds and a second.

Lyall Appo, who rode a double at Burrandowan, had a quieter day. He brought home a second in Race 2 but his mount Johnny Aucash was a late scratching in Race 4 on veterinary advice after it was kicked by another horse. 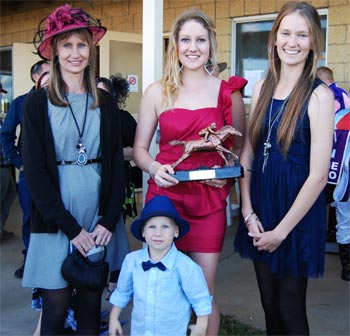 Ray Hancock's second winner for the day ... Kamarah in Race 5