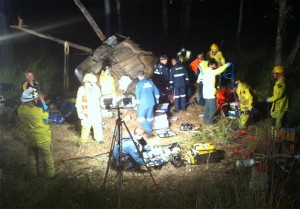 Emergency personnel at the scene of the Brovinia car crash. Photo: RACQ CareFlight

Police attended the scene of a fatal traffic crash which occurred at Brovinia, south of Mundubbera, this afternoon.

Initial information suggests one person died after the vehicle they were in crashed on the Mundubbera-Durong Road at about 4.45pm.

One other person was seriously injured.

The Forensic Crash Unit will investigate the incident.

Police say a Korean citizen was killed in yesterday’s crash on the  Mundubbera-Durong Road.

A stationwagon was travelling south on Mundubbera-Durong Road around 4:45pm when it ran off the road as it travelled around a bend. The car ran along an embankment for a short distance before hitting a tree.

The male driver, believed to be 27, died at the scene.

Two passengers in the vehicle were injured. A 27-year-old man was taken to Toowoomba Base Hospital with leg injuries and a 22-year-old woman was flown to the Royal Brisbane and Women’s Hospital in a critical condition.

All the occupants in the car were Korean nationals.