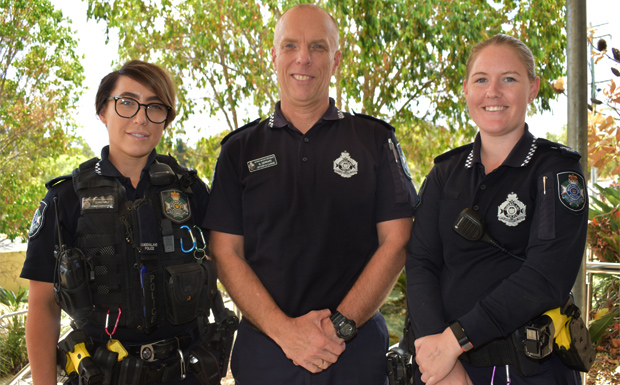 There’s some new faces on the beat in Murgon with the recent arrival of three new police constables at Murgon station.

This means there are now 23 police officers and four detectives based in Murgon.

Constable Alexander Weekes has been assigned to Murgon for his first 12 months of training.

Acting Snr Sgt Gerrard said it was the first time for some years that a 1st Year constable had been placed at Murgon.

The other two new faces are Constables Emma Carruthers and Jenna Smedes.

southburnett.com.au caught up with the two women on Wednesday afternoon.

The pair went through the Oxley Police Academy together, both graduating in June 2018.

Constable Carruthers, who is originally from Gladstone, then served at Redcliffe police station before applying to come to Murgon.

Constable Smedes, from Gympie, did stints at Logan Central and Beaudesert before Murgon.

She said Murgon was a “nice, country town” and she was looking forward to her minimum two-year placement as it was close to family at Gympie.

Acting Snr Sgt Gerrard said it was great to put a bigger footprint into the community, and he expected more staff would be coming later in the year.