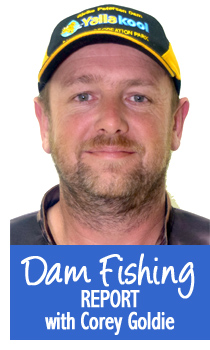 Here’s the fishing report for Boondooma and Bjelke-Petersen dams for the week ending Monday, December 21:

Bass have been getting caught up among the weedy areas and the sticks, mainly on spinner bait.

Golden Perch have been having a quiet week with only a few getting caught in the deeper waters. Dark-coloured lures seemed to be the pick for the fishos out there.

Red Claw are still out and about with good numbers being caught.

An absolutely great week for fishing with so many reports of Bass being caught on Spinner Baits and Hard Bodies at Bass Point and in the sticks using White and Purple lures.

Not as many Golden Perch are being caught but plenty of 35cm+ Australian Bass to compensate for the lower number of Golden Perch. Hope this keeps up ever the New Year!

Some red claw being caught near the BP Saddle Fam with approximately 6 to 10 caught on average. Shrimp are scarce and can only be found in Barambah Creek at the moment.

Villa – Booked out until January 17. One new cabin available from January 9-15