Amaroo Drive in Wondai received a bright new addition to its street sign on Friday: a second, red sign that declares the road is now also “Santa Claus Lane”.

This year, South Burnett residents who put up Christmas lights displays for the festive season were urged to band together to demonstrate their neighbourly co-operation for the South Burnett Regional Council’s annual Christmas Lights competition.

The top neighbourhood was offered the chance to have “Santa Claus Lane” added to their street sign.

Council received over 40 entries for the new competition, which was judged by CEO Mark Pitt.

“I thought this was a great way for residents to demonstrate their community spirit, work with their family, friends and neighbours, and provide some Christmas cheer for other community members,” Mark said.

“In addition, the community will be able to recognise the winning neighbourhood’s festive spirit throughout the year because of the Santa Claus Lane sign.”

Mark said it was difficult to pick a winner from so many good entries, but he was very pleased to award the first sign to Wondai.

“I’d like to offer congratulations to all the families on Amaroo Drive, and in particular the Hasler, Kennedy and Bartlett-Kennedy families for submitting entries in the competition.

“Their combined displays embodied Christmas and cooperation, and they will receive the inaugural ‘Santa Claus Lane’ street sign.”

The Santa Claus Lane sign will become a perpetual award each Christmas to recognize a winning street’s participation in the Christmas Lights competition.

Mark said he also wanted to congratulate the residents of Pring Street in Wondai, Muir Drive in Nanango and Nobby Way in Kingaroy who were all highly commended. 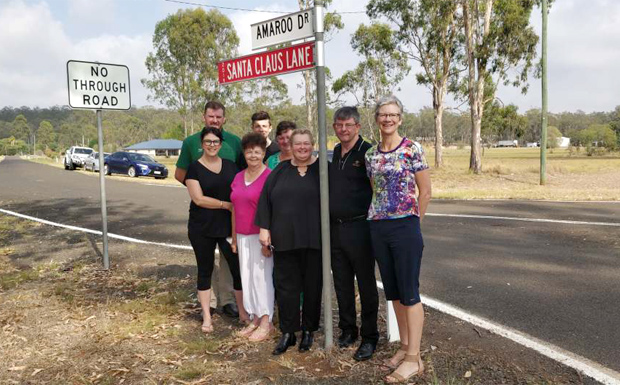 Members of the Hasler, Kennedy and Bartlett-Kennedy families gathered ton admire the new sign after it was bolted into position