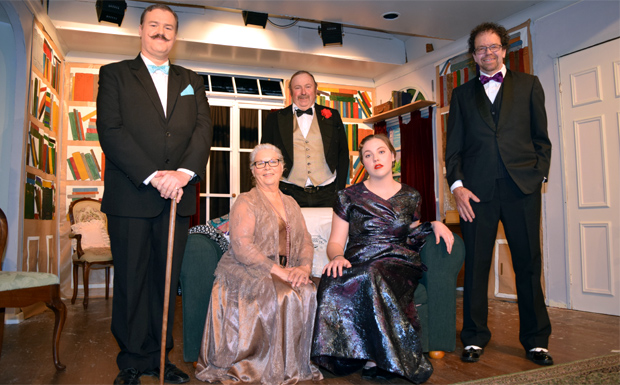 Fans of Agatha Christie’s Belgian detective Hercule Poirot are in for a special treat later this month, courtesy of the Nanango Theatre Company.

Poirot is the star of “Black Coffee”, the first piece Agatha Christie wrote for the stage.

In the play, Poirot and his good friend Captain Hastings are summoned to visit a famous physicist, Sir Claud Amory, but discover on their arrival he has been murdered.

The three-act play revolves around a stolen formula, with Poirot deducing which of Sir Claud’s house guests or family members is the killer.

It was also turned into an English film in 1931, a French film the following year, and a novel written by Charles Osborne in 1998.

Cast members have scoured op shops to secure their period costumes, which are the epitome of 1930s elegance right down to Captain Hastings’ wing-tipped shoes.

Producer Anne Davoren said the group has been rehearsing since the start of June and are very excited to bring it to the South Burnett.

“We had to work hard to secure the rights but we think it was worth it,” Anne said.

“This play is really a lot of fun and it will keep most audiences guessing right to the very end.”

Black Coffee will be performed at the Nanango Theatre House in Elk Street, Nanango at 7:30pm on Friday, August 30, and the following Friday and Saturday, September 6-7.

There will also be a matinee performance on Saturday, August 31, at 3:00pm.

Tickets are $20 for adults and $15 for concessions, and they can be bought at the Nanango Visitor Information Centre in Henry Street or by phoning (07) 4189-9446.

The theatre doors will open 30 minutes before each performance.