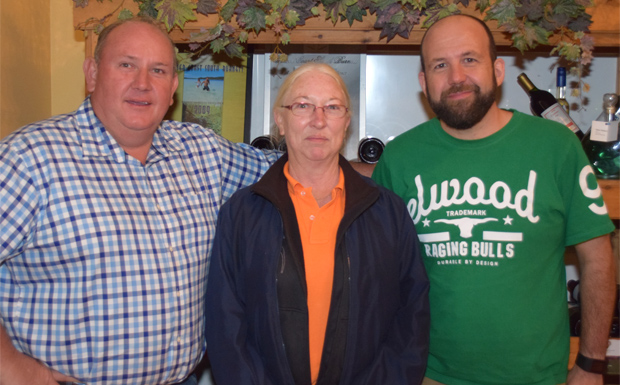 Several SBWIA members are already growing small plantings of Mediterranean varieties that would probably be unfamiliar to most ordinary wine consumers – such as Barbera, Sangiovese, Tempranillo and Viognier – but the Association wants them to grow more.

At the group’s Annual General Meeting held at Moffatdale Ridge Wines on Tuesday night, SBWIA president Jason Kinsella said he was so confident the future of the region’s wines lay in Mediterranean varieties that he believed the Association should fund trial plantings of its own.

“At the moment, many of our winemakers are trying out new varieties themselves,” he said.

“But rather than wait decades to find these winners, I think we should start to actively search them out.”

Mr Kinsella said Verdelho was a good example of an “obscure” variety that had turned out to be a major winner for the South Burnett over the last decade.

The grape, which is native to the Madeira Islands off the coast of North Africa, produces a semi-sweet white wine in the South Burnett full of tropical flavours and aromas that matches perfectly with Asian cuisine.

South Burnett verdelhos – although less than a decade old – are now rated as the second or third best in Australia, and seem likely to be rated as the best in the nation within the next ten years.

A major reason for this is the close match between the South Burnett’s climate and the grape’s native climate.

When Verdelho is grown in cooler climates, such as the Granite Belt or other vineyards in NSW or Victoria, the wine’s taste alters significantly.

It becomes more herbaceous, grassy and spicy, and is nowhere near as pleasant or easy to drink as the local version.

“There are other wine varieties – particularly from Italy and parts of Southern France – that will probably do exceptionally well in the South Burnett because the climate of these areas matches our own very closely,” Mr Kinsella said.

“Our customers want great wines now. So I think we should start a trial planting program to find them as quickly as possible.”

In his President’s Report, Mr Kinsella thanked Mrs Greenwood for her “untiring efforts” which made his own job significantly easier than it might otherwise be.

“I think we have had a great year in 2015, which has seen one of best vintages on record and some great successes on the wine show circuit,” he said.

“Once again, we have seen some old members move on and some new members join. We have also seen great successes with Clovely Estate being awarded a 5 star rating with James Halliday as well as the trophy for Best Queensland Red at the Queensland Wine Awards in an amazingly strong field.

“This is a result, I believe, which stands testament to the years of hard work and faith in our region our members have shown, and a success which is an enormous shot in the arm for us all.”

“We have seen the loss of a great friend – not only personally, but to our industry – in Ken Parkes’ departure,” Mr Kinsella said.

“Ken was taken in July this year and I’m sure everyone who knew him will grieve his loss.”

2015 was also marked by the region gaining a higher profile.

“An increasing number of our wineries have been out and about together, showcasing South Burnett wines at events like Relish in Maryborough, Regional Flavours at South Bank and The Carnival of Flowers in Toowoomba,” he said.

“I believe there is some really fertile ground for us out there.”

Mr Kinsella said the region had also been fortunate to have had great weather and a good crowd for the annual Wine And Food In The Park festival.

“The weather has been fantastic if not a little challenging early this season and the recent rains have brought welcome relief,” he said.

“Let’s hope they continue – but perhaps not until late February.

“Overall, I am very confident and optimistic about the year ahead.”